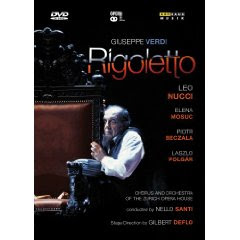 From director Gilbert Deflo I expected a stylish, minimalistic production with period outfits. Which is what he provides, though the gowns were not as lavish as in his Paris production of Manon, and the setting not as stylish as his L´Amour de trois Oranges or Ballo di Maschera. But nevertheless, stylish it is, leaving ample space for the characters to shine.

In that respect, Leo Nucci is close to unbeatable as Rigoletto, even at 65. Perhaps not vocally, as he is past his prime, but dramatically his characterization is simply unbeatable, by far the best available on DVD. His is a multifacetted portrait and indeed the center of the opera.
Elena Mosuc has a fuller and darker voice than many Gilda´s, refreshingly free of the all-to-saintly colouring often associated with the part. I was rather surprised to see her re-enter the stage and take a solo-bow after the Caro nome..though probably a better solution than to remain fixed in an unnatural position for endless minutes waiting for the applause to stop. To round up the cast is Piotr Beczala, close to ideal as the Count.

Nell0 Santi looks more like a Sicilian mafioso than a conductor, however it is quite apparent from the start that he knows how to make this piece flow.