Wagner Gala. July 8th 2007. Bavarian State Opera. Soloists: Waltraud Meier, Plácido Domingo, Martin Gantner, René Pape. Conductor: Kent Nagano.
Greeted by more than 20 minutes standing ovations from the entire auditorium, it would be fair to say that yesterdays Wagner Gala at the Bavarian State Opera was an audience success. To be concluded by Waltraud Meier, Plácido Domingo and René Pape appearing on the stairs outside the opera house to greet the approximately 20.000 people watching the show on big screens outside as hundreds of balloons were released in the evening air.

I actually had managed to get a (reasonably good) ticket inside. And everything was kicked off with the Entrance March from the 2nd act of Tannhäuser followed by Martin Gantners fine delivery of Wolfram´s song to the Evening Star.

Then came a non-stop Tristan mix: Prelude-Markes lament-Isoldes liebestod with René Pape quite predictably as the finest King Marke as anyone will ever hear and Waltraud Meier repeating her transcendental liebestod.

After the intermission came what most had been waiting for: Plácido Domingo as Siegmund in a full performance of Walküre Act 1.
Domingo may be 66, and his voice may have lost some power in the top register. Furthermore, he may have looked slightly exhausted as well. Nevertheless, he still manages to be a more convincing Siegmund than anyone I have heard or even heard off, performing on stage today. Waltraud Meier´s Sieglinde is as wonderful as ever and Wotan-in-disguise René Pape was a quite unpleasant Hunding in superb voice.

Even the at times a-dramatic Kent Nagano led an unusually engaged performance.
Posted by mostly opera... at 09:56 3 comments: 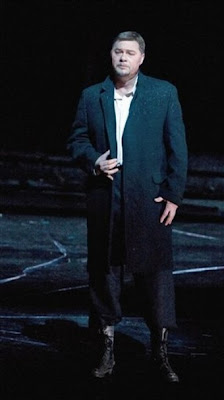 René Pape is cancelling his role-debut as Hans Sachs at the Berlin State Opera next year. He will be replaced by James Morris. This will be James Morris´ first Hans Sachs in Europe (and his first time working with Daniel Barenboim as well).
Posted by mostly opera... at 09:00 3 comments: 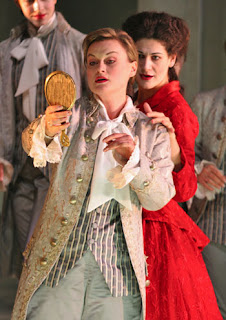 First of all, Alcina is really a long opera, totalling 4h 30 min, with intermissions. And some say Wagner operas are long...

Christoph Loy´s Alcina is both simple and aesthetic. Audiences at Bavarian State Opera´s Prinzregententheater responded with raptuous applause, in particular for Vesselina Kasarova, Anja Harteros and Christopher Mould. And understandably so - for Händel afficionados, this seems as close to heaven as anything on an opera stage may aspire to be.

Needless to say: It was a first-rate performance. Vesselina Kasarova was absolutely brilliant in the trouser part of Ruggiero with her dark, virtuous mezzo and androgynous appearance. Interesting how she will do in the heavier repertoire, she seems determined to take on , beginning with Carmen in Zurich.

Anja Harteros beautiful, clear and stylistically solid soprano combined with her dark-haired slender looks makes it hard to come up with arguments as to why she isn´t the ideal Alcina.

Combined with Christopher Moulds´ inspired orchestra and an excellent supporting cast, I cannot imagine a better advocate for Alcina than this production, rumoured to be taped for DVD release as well. Apparently, the audience agreed, responding with several minutes of applause after each individual aria as well as standing ovations at the end.
Posted by mostly opera... at 16:59 1 comment: 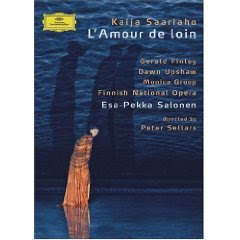 I was virtually blown away by the sheer beauty of the music in Finnish composer Kaija Saariaho´s first opera L´amour de loin, which now has appeared on DVD in a Peter Sellars production from the Finnish National Opera.

Saariaho´s music is both lucid and transparent with a dream-like quality, describing moods rather than events, a quality matched by the relative absence of action in the opera as well. Saariaho obviously knows how to work with a large orchestra and the orchestration is simply exquisite.

L´Amour de loin is based on medieval French poems about about A Troubadour falling in love with A Countess he has never seen. A Messenger travels between them. When they finally meet, he dies in her arms. Short on physical action, the opera explores the various feelings of the protagonists such as doubt, longing, insecurity. In that respect the work bear resemblance to Debussy´s Pelleas and Melisande. And to Tristan and Isolde. Gregorial church music seems to have inspired Saariaho as well and the almost oratorial quality including an invisible choir commenting on the action bears resemblance to Stravinsky´s Oedipus. That said, Kaija Saariaho´s language is unique and highly individual.

Peter Sellar´s setting is very simple: A tower, where the lover/loved lives; water; a boat for the Messenger travelling back and forth between the Troubadour and the Countess.

Esa-Pekka Salonen draws a wonderfully transparent sound from the orchestra and all three protagonists convince.

Only one thing I cannot help but wish for: While there is surely a lot of wisdom to gain from French medieval poetry, I would have appreciated if Saariaho had chosen a more modern textual source for her opera - to experience this outstanding music in a more contemporary context would have been fascinating. However, this is merely an afterthought. 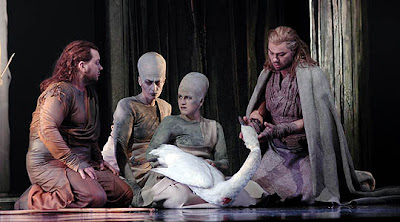 Filmmaker Bernd Eichinger (from The Name of the Rose and Downfall) really does not know how to direct opera. On the other hand, he does know how to create a filmic backdrop, which is the essence of this Parsifal production opening to ferocious booing at the Berlin State Opera in 2005.

In brief, Eichinger´s Parsifal is a time travel initiated in space, where a backdrop projection of the earth accompanies the prelude.

The opera begins in a timeless ancient Egypt-looking setting for Act 1, amidst mighty broken pillars and naked tree-trunks.
Act 2 take place in an entirely abstract setting of a virtually naked stage playing on few sharp colour-contrasts. Video projections are used extensively, especially in the scene between Kundry and Parsifal, where we are presented with a flash-back through history accompanying Kundry´s tale of the Saviour.
Subsequently there is a major jump in time, transporting us to post-2001 New York City, in which a barbed fence separates the now aged Gurnemanz, Parsifal and Kundry from the City of two rivaling gangs. In the end, the gangs make peace and Kundry gets together with Parsifal. That the Grail was symbolized by Amfortas´ heart was one of the major controversial issues of this production, the New York gangs and the video-projections being the others.

In truth, Eichinger does not offer much in terms of individual characterization, not to speak of direction of the singers, which seem left entirely to their own devices within this epic film landshape. On the other hand, several of the singers cut very convincing figures on stage, and Eichinger´s production offers a fine background on which the music may shine. These qualities alone make it one of the best Parsifal productions on the circuit.
However, the main reasons to see this Parsifal are Daniel Barenboim and René Pape.

Daniel Barenboim´s Parsifal does not have the glittery brilliance of Christian Thielemann. What is has, however is even more compelling when heard live: It goes beyond the glitter and presents a dramatically engaged reading, which simply is riveting. All created by Barenboim´s usual dependence on rubato in a top-tuned string section. And what an orchestra, the Staatskappelle has become. Among the best in the world in this repertoire, no doubt.

That René Pape is absolutely smashing as Gurnemanz should hardly come as surprise. For once the stories of Gurnemanz are exciting and the long legato-lines lie perfect for his voice. Furthermore, the production allows him to wander around on stage with great authority as it basically suits him, I suppose. Nobody even approaches his artistic level in this part today, and I seriously wonder if there has been finer interpretations of Gurnemanz in history? In which case I have not heard them.
In February, Michelle DeYoung was Kundry. A fine voice, though not memorable and furthermore quite uninteresting on stage. In March, Kundry was Michaela Schuster, who seems to inhabit the role on stage, though with a rather rough voice. Throughout the run, Parsifal was played by Burkhard Fritz, quire unmemorable. Much more interesting Jochen Schmeckenbrecher as Klingsor and both Wolfgang Brendel and Hanno Müller-Brachmann were fine, though Amfortas perhaps is a bit too heavy for Hanno Müller-Brachmann.
Act 1: 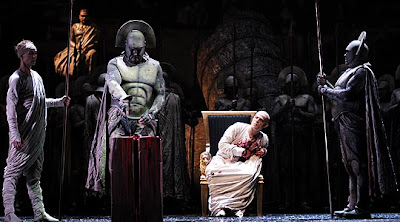 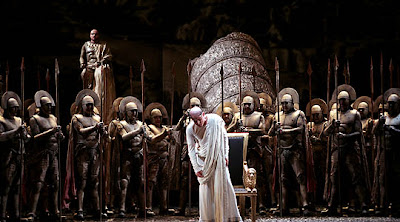 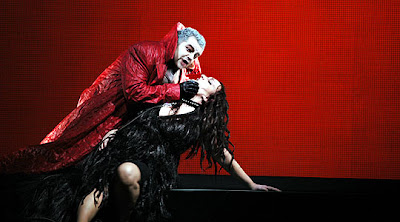 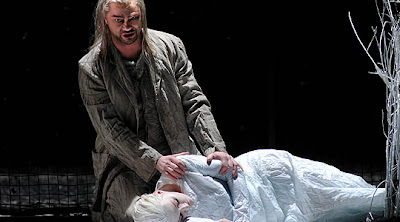 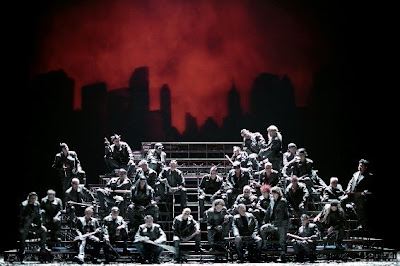