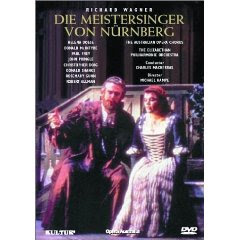 Michael Hampe has directed a solidly traditional and straightforward Meistersinger for the Opera Australia in 1988. Traditional, yet simple sets, a sort of combination of Wolfgang Wagner´s 1984 Bayreuth production and the 1995 Berlin Götz Friedrich production. Personally, I prefer the Australian sets to both of the above and furthermore Hampe manages to infuse considerably more life into this rather lively production.

All of the cast were good, though perhaps not exceptional:

Paul Frey looks the part, and while he sings well in the first act, he almost retorts to yelling at the end. Worst, however, he is no more interesting to watch on a stage than in his Bayreuth Lohengrin a couple of years later. Vastly better is Helena Döse´s rather fine Eva reaching the excellent in the performance from John Pringle, whose Beckmesser I recall someone described as "Black Adder of opera"
Donald McIntyre has star quality, which makes up for quite a lot. Vocally he is on the dry side however, the monologues being his weakest points. In the dialogue sections, however, he is excellent - dramatically as well. Though he by the middle of the third act his vocal limits have been reached and in the final monologue he is vocally close to dead.

It is obvious that Sir Charles Mackerras is a fine conductor with genuine grasp of this score, though to my tastes he is too fast and the elusive flow, so critical for Meistersinger never really manifests itself. It is equally obvious that Opera Australia´s orchestra no matter how optimal the conductor and surroundings is no match for the Bayreuth Festival orchestra.

For those preferring a solidly, traditional Meistersinger on DVD, I would still recommend the Metropolitan Opera Schenk/Levine production.