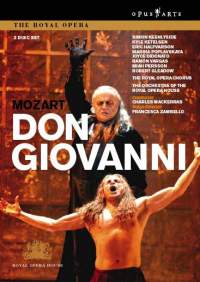 I have never really understood why Francesca Zambello has been invited and re-invited to stage operas in virtually all the major opera houses: I have never once seen a staging by her which I found exciting, or even interesting. Okay, once she was involved with something exciting: The Carmen with Jonas Kaufmann andAnna Caterina Antonacci. However, this was exciting despite Zambello´s best efforts to drown Carmen in dullness.
Suffice to say that I agree with all those who found this Don Giovanni ugly and boring and I disagree with those finding the DVD much better: A circular wall of glass, dark colours throughout. A death-scene with live flames and then a bare-chested Simon Keenlyside in baggy pants, not to mention the foolish wigs both he and Leporello wear – is this a comedy or tragedy, really? The characterization seemed monodimensional as well with Don Giovanni the rogue, Leporello the more anonymous, Donna Anna the elegant and Donna Elvira the desperate.

As to the musical side, things look rather better. Best of all is Joyce DiDonato, a strong-voiced clear Donna Elvira. Also Kyle Ketelsen, in strong voice, shows quite a comic talent as Leporello. Robert Gleadow (23 years old at the time of the recording..) and Miah Persson are sweet. However, while Marina Poplavskaya as always inhabits her character more than 100% ,vocally she seems quite thin and overchallenged, especially in “Or sai chi onore”.
Simon Keenlyside himself is clearly among the top choices of any Don Giovanni production today, though I´d like to see him in a better directed production, frankly. As always I almost forgot the Don Ottavio: Here  Ramon Vargas, though I do not really know what to say about him: He sings his arias well, but Mozart did not give him much to work with in terms of characerization to begin with.

There are many, many Don Giovanni DVDs out there, and off-hand I can without difficulty name at least 5 better than this one. In fact, all the Don Giovanni DVDs I havereviewed are better than this one, though I admittedly have seen worse as well. Much worse. The late Sir Charles Mackerras (deceased in 2010) was engaged, and clearly masters the score, despite the fact that I largely disagree with the ornamentations he asked the singers to perform, though they were in no way offensive.