As in January 2008, Rolando Villazon chose Vienna for his comeback, this time as Nemorino (L´Elisir d´amore), after vocal chord surgery. A logical choice, as he is much loved there, and audiences predictably reacted with major ovations including 5 minutes applause after "Una furtiva lagrima".
Others were rather critical of his performance, to put it mildly.

However, Nemorino is a sort of warm-up round and the next months will show. Next up is Eugene Onegin in Berlin next week in a 100% pre-choreographed Achim Freyer production where he cannot hide behind neither acting skills nor Barenboim´s orchestra.

Until we know how this turns out, why not live in the past: Same singer, same production, same place...same voice?

Rolando Villazon was recently elected the greatest living tenor on stage, whether some of you (including myself) like it or not..At least we´ll know in a couple of weeks exactly how great he is at the moment.

Now it is time to elect the greatest soprano on stage - ie. best currently active soprano. The vote will be between the sopranos listed below, UNLESS I receive alternative suggestions within the next two days, after which the vote shall begin.

RAI footage of the unforgiving Karol Wojtyla (aka Pope John Paul II) accompany the third act of the new Fura del Baus staging of Tannhäuser at Scala. Predictably met with booing at opening night.
Otherwise the Catalán theater makers look like themselves:

Being Richard Wagner´s grandson, his tenure as leader of the Bayreuth Festival virtually lasted more than a lifetime, beginning with the re-opening of the New Bayreuth after World War Two in 1951, jointly leading the Festival with his brother Wieland until his death in 1966 and from then on alone until retirement in 2008.

While Wolfgang Wagner may not primarily be remembered for his achievements as a stage director, where he remained firmly rooted in the camp of Wieland Wagner´s New Bayreuth style, he has proved a succesful leader of the Bayreuth Festival. Mainly through his courage to engage innovative and experimental stage directors as well as his belief in young talents, shaping some of the most distinguished Wagnerian performers of our generation.

At the moment, unfortunately, the quality of both singers and conductors at the Bayreuth Festival has reached an unprecedented low point, and the biggest challenge for the new management (his two daughters Katharina Wagner and Eva Wagner-Pasquier) will be to recreate the high musical quality, ultimately essential for the Bayreuth Festival to be anything but a museum.

Unfortunately Wolfgang Wagner never once and for all faced up to his past during the Nazi-infested Bayreuth of the 1930´s and 40´s including the opening of remaining archives from that period. Had he done so, it would, in my opinion, surpass any of his other achievements.

Eight years before opening the New Bayreuth Festival, Wolfgang Wagner received Hitler in Bayreuth 1940 (visible in the background):
In the 1950´s and 60´s, regular singers in Bayreuth included Astrid Varnay, Hans Hotter, Birgit Nilsson and Leonie Rysanek. Among the conductors, Hans Knappertsbusch was a virtually constant presence, below seen conducting Parsifal in Bayreuth 1959 - performances, which will most likely never be surpassed or even equalled:
During his entire tenure Wolfgang Wagner staged several productions of his grandfathers works, starting with Lohengrin in 1953.
Below his staging of the Ring 1974:
In one of the best decision of his career, Wolfgang Wagner decided to follow the advice of Pierre Boulez and hire the young French director Patrice Chéreau to stage The Centenary Ring in 1976, one of the few Wagner stagings which truly deserves the label "legendary".
Below Jeannine Altmeyer and Peter Hoffman in a Walküre Act 1 that is yet to be surpassed on DVD:

Among the directors Wolfang Wagner introduced in Bayreuth, where initially scandalous performances were later acknowledged by many as ground-breaking Wagnerian theater, was Götz Friedrich with Tannhäuser in 1972 (released on DVD) and Harry Kupfer with the Flying Dutchman (1978 - also available on DVD).
Also in these years, some of the foremost Wagnerians of our time began their international careers in Bayreuth, such as Daniel Barenboim (debut and international breakthrough as Wagner conductor with the Ponnelle-directed Tristan in 1981), Waltraud Meier (debut and major breakthrough as a 27-year old Kundry in 1983) and Siegfried Jerusalem (debut as Froh 1976).
Waltraud Meier as Isolde with Daniel Barenboim conducting from Heiner Müllers 1993 Bayreuth production, now available on DVD:
Poul Elming, a Danish tenor, also had his major breakthrough in Bayreuth and is here seen as Parsifal in one of Wolfgang Wagner´s better productions from 1989. Sinopoli conducts:
Wolfgang Wagner´s last staging in Bayreuth was Meistersinger in 1996 (featuring Renée Fleming as Eva), filmed in 1999 and released on DVD.
Daniel Barenboim conducts the ouverture in his last season on the Green Hill in 1999:
In later years Wolfgang Wagner also brought directors such as Claus Guth, Keith Warner, Jürgen Flimm, Stefan Herheim and Christoph Schlingensief to Bayreuth.
Musically, the highlight of recent years has been the conducting of Christian Thielemann. No matter how innovative and inventive the staging approaches are, if the quality of the singers and conductors is not raised, it will all amount to nothing.

Why not celebrate the 200th birthday of Chopin (March 1st 2010) by deciding upon who is the greatest living (=active) Chopin pianist?

Vote below (open one week from now) - if your favorite Chopin pianist does not feature, please use the free text or the comments section, and I may add him/her.

What do you think about the 2010-11 Metropolitan Opera season? Vote below. Vote ends one week from today (March 7th). 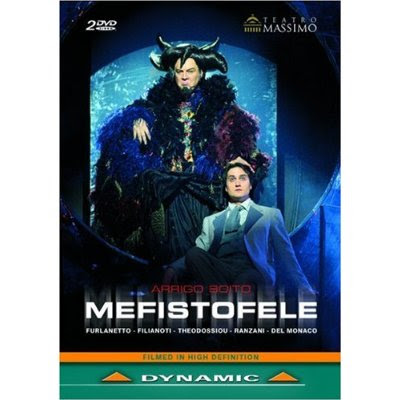 In this Palermo production of Boito´s Mefistofele, Giancarlo del Monaco sets the action in a rather drab and incoherent imitation of Germany in the 1920´s combined with a Las Vegas show and abstract-figured sets reducing the characters to something less than this quite fine music deserves. Fine performances from both Filianoti and Theodossiou doesn´t make up for the orchestra not really being first rate.

If you only need one version of Mefistofele on DVD, there really is no reason to make it this one. Unless, you are a fan of Ferruccio Furlanetto, a quite convincing Mefistofele, though not exactly overshadowing Samuel Ramey on the only alternative Mefistofele on DVD - the quite spectacular San Francisco production, which remains a solid first choice for this work. 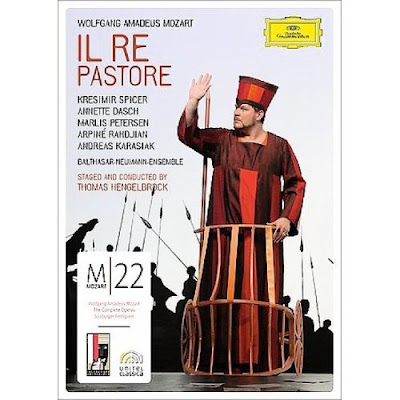 Not exactly a standard work in the repertoire, Mozart´s two-act serenata from 1775 (he was 19) Il re pastore, libretto by Metastasio and previously used by several other composers, such as Gluck. A story including the usual ingredients of fidelity, love and a benevolent ruler, whose element of rigid opera seria are emphasized by director-and-conductor Thomas Hengelbrock in this stylized set-up.
Creating a stage within the stage, with present-day characters surrounding the black-and-white pantomine look-a-likes of the shepherd/king-to be (wonderfully played and sung with a dark, silvery timbre by Annette Dasch) and her beloved Elisa (in Marlis Petersen´s crystal clear high notes), Hengelbrock creates a play within-a-play:
Initially all characteres meet in front of the stage in modern dress, play a game of cards, where Aminta and Elisa draw two hearts prompting them to quickly change into pantomime dress to enter the second stage to let the play begin..
Interchanging between characterized pantomimes and modern-day real characters Hengelbrock emphasizes the duality of this piece. Not a masterpiece, perhaps, but a highly entertaining staging.

Annette Dasch as the shepherd (future king) on the stage-within-the stage "Aer tranquillo":

The readers have spoken:

With 37% of the votes, Rolando Villazón was elected as the best tenor of the moment. Closely follwed by Juan Diego Florez with 34% and with Jonas Kaufmann taking third position with 20% of the votes.

To be honest, I forgot to vote myself, but one vote more for Jonas Kaufmann would unfortunately not have made the difference. The readers have spoken, indeed...

Below, Rolando Villazon with "Una furtiva lagrima" in the new production from Barcelona to be released on DVD: 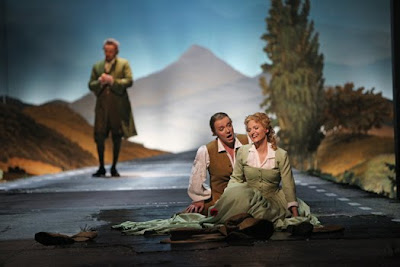 First performance (?) of Rolando Villazón singing "L´Alba" on the Popstar to Operastar show on January 29th after his vocal chord surgery. And the questionmark? I suspect it is play-back. Am I wrong?

Best tenor of the moment - vote!

Now, let us once and for all decide upon who is the greatest tenor of the moment - vote below!
The vote will be open for one week. No cheating! One vote per person only!


Please note this vote is supposed to reflect the tenors status as of now - ie. Plácido Domingo´s must be judged only on current achievements, same as Rolando Villazón, who is only marginally eligible (your choice), and will have to be judged from last years performances.. 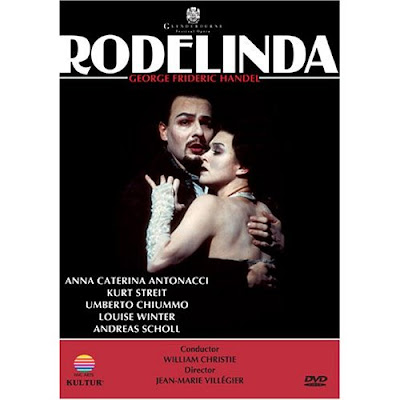 In genereal, these baroque operas do well with updating, and this is no exception updating Händels 1725 opera to the 1930´s in a stylish film noir production. Simplistic, contrasing colours and silent screen type acting and lighting, this is an exceptionally successful update.

For once, the action is straight-forward and reasonable: The queen Rodelinda believes her husband, the rightful King Bertarido to have been killed by Grimaldo, who tries to win her in marriage. However, loyalty and fidelity prevails.

Anna Caterina Antonacci´s expressiveness and presence easily outweight her occasionally shaky tones. Combined with beautiful singing from then up-and-coming counter tenor Andreas Scholl in his operatic debut and not a single weak link in the rest of the cast, this is an easy recommendation.

Record of the year 2009: The Verdi Requiem 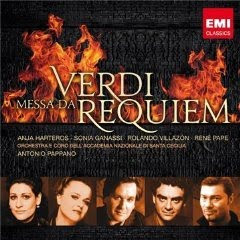 As far as I am concerned this is THE release of 2009. And a Verdi Requiem of a quality I have not heard in decades of recording. All the pieces come together for Antonio Pappano, despite an odd engineering choice, making the initial 2 minutes inaudible. But from there on, there is very little to criticize in a performance of rare coherence. Combined with an excellent soloist quartet this is not to be missed.