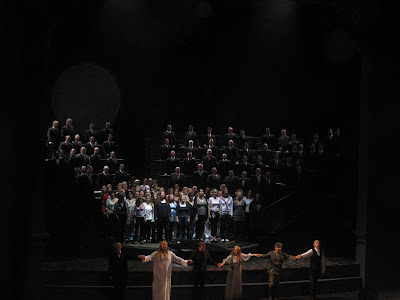 38-year Norwegian director Stefan Herheim has managed to create a Parsifal with just the right mix of novelty and tradition to make it a success with the rather conservative Bayreuth Festival audiences who visibly breathed relief after four years of the much maligned production by Christoph Schlingensief.

Ironically, the major problem with both Schlingensief´s and Herheim´s Parsifal productions, despite their vastly different approaches, is the same: Both present myriads of ideas, sufficient for several new Parsifal productions on an over-stuffed stage, downstaging both singers and music and ultimately creating confusion as opposed to enlightenment.

While Schlingensief chose the philosophical-spiritual road, Stefan Herheim seemed set on telling the story of Bayreuth (and Germany) from the 1870´s to the 1950´s. Had he just stuck to that, the production may have been great. But on top, he adds 1) a heavy Freudian tale of Parsifal and his relations with women, 2) a surrealistic imagery of supernatural creatures such as black birds of night 3) a myriad of symbols (eagles, swans etc.) on a generally overstuffed multilayered stage complete with video projections of Freudian symbols in the background, a feature known from his previous Entführung production in Salzburg 4) Religious overtones by presenting Amfortas a Jesus-figure etc etc..
Needless to say, for all these ideas to fit into one production, several things have to happen on stage simultaneously.

The interiour and garden of Villa Wahnfried is a main feature of the sets. Act 1 opens with Herzeleide´s death played out to the tones of the prelude. We are in and outside Villa Wahnfried and during the first Act we move up to the beginning of World War 1 through more symbols than even Syberberg managed to squeeze into his 1983 Parsifal film: Gurnemanz and Kundry: The black birds of night, Parsifal in sailor´s uniform, the naked boy cum old man alter ego Parsifal re- vs. disappearing in a bath tub, the illustration of Gurnemanz´ tale with a kitschy version of the Klingsor-Kundry-Amfortas drama. All complete with Freudian projections on the back stage and a set that changed between the inside and the garden of Villa Wahnfried, respectively. And a Jesus-figure Amfortas carrying a kitsch grail. As well as a death-mask. And I haven´t even mentioned half of it. Confused?

In Act 2 we have now moved forward to the 1920´s, and numerous references to the film industry such as Marlene Dietrich are applied as we see showgirls with the dead heroes in Klingsor´s (here a transvestite) castle (here: A lazaret) complete with a Parsifal-stuntman jumping down from the balcony. The symbolism is handled rather heavy-handed, the lowering of Nazi flags in Act 2 and the Nazi soldiers perishing in front of Parsifal is almost embarrassing and elicited several laughs from the audience. And: When o when will it become possible to see the spear change hands from Klingsor to Parsifal in an even remotely realistic way.

In Act 3 we are back in the garden of Villa Wahnfried among the ruins after the end of the Second World war. The act is played out rather conventionally until the transformation music, at which point the production suddenly becomes great and with an edge: The curtain goes down. Wieland and Wolfgang Wagner´s memento from 1951 is projected on the curtain asking the audience to refrain from discussing politics on the Green Hill: ”Hier gilts um der kunst”. Then we are inside the Reichstag. The back wall of the stage turns into a mirror reflecting the audience. The eagle on the floor of the Reichstag is reflected in the mirror globus in the ceiling. After Parsifal, the Saviour releases Amfortas (to death) he disappears down through the eagle, which subsequently becomes red, flooded with water. All reflected in the ceiling. They must have blown the budget to create this. But it looked great. The family of Kundry, Gurnemanz and the child Parsifal (emerging from Wagner´s grave cum prompters box) takes front stage. In the end, the globus is lowered and mirrors the Bayreuth audience. The future, we understand, is ours.

As much as I hate to say it: At no point was the production moving or poignant. Strangely enough it seems as Stefan Herheim has too much respect for the work. He only scratches the surface and at no time becomes really dangerous or even interesting. There is nothing of the stylish innovation or provocative insightfulness of his 2003 Entführung from Salzburg. Only during the last 10 minutes do we see the outlines of a great production.

The distinct impression remains, that Stefan Herheim does not trust the power of the music and overworks the stage technicians as well as the set designer (Heike Scheele) to create what is ultimately unnecessary and distracting action on stage producing a lasting flickery image.
No doubt that Stefan Herheim is a fine director, but he has failed to grasp the structure of this work. His Parsifal strikes me rather like a draft, which may turn into a great production provided extensive editing is applied. Luckily, he will have this opportunity here in Bayreuth in upcoming seasons.

Contrary to writings of several so-called professional music critics, the concept of Parsifal as a journey through history is not new and may be seen 600 km further north next season in Bernd Eichinger´s much superior (musically as well) Parsifal production at the Berlin State Opera. Ironically, Eichinger´s Parsifal is a result of Stefan Herheim declining an invitation from the same house six months prior to accepting the offer from Bayreuth. From a promotional point of view this is an understandable choice, but from an artistical point of view I believe Stefan Herheim would have been much better helped working with the eminent Wagnerian master of structure Daniel Barenboim, who I believe would have convinced Stefan Herheim to reduce the frenetic stage activity considerably. At any rate the new Lohengrin, which Herheim is scheduled to direct in April 2009 at the Berlin State Opera will give an indication of the truth of that point.

That the singers were completely pushed in the background by all this frenetic stage activity was in fact to their advantage as they were rather inexpressive and for most parts lacked authority:

Kwangchul Youn is a fine Gurnemanz, but his lacking of both authority and expressiveness prevents him from becoming a great one. Mihoko Fujimura is as miscast here as earlier this season in Vienna – a beautiful voice, but with none of the power and expressiveness required of Kundry. Christopher Ventris, who seemed to have lost some weight as well, on the other hand was a really fine Parsifal, clearly the best of the cast. Detlef Roth stood out as Amfortas as well. The flower maidens were...simply the worst I have ever heard in a professional theater.

I thought Daniele Gatti rather fine on the broadcast of the opening night and expected him to be even better live. He was not. Ultimately he fell into the trap of setting slow tempi without managing to maintain the essential tension, resulting in the almost unbearable dragging of long stretches to the point where the music simply seemed to stop... Combined with very odd and sudden changes of tempi and a failure to really push the orchestra in the big moments. However as his first performances in this treacherous pit, his performance was definitely honorable if not more than that.

Of course, half of the audience applauded after the first act accompanied by the hissing of the second half. Now, why this audience behaviour was repeated also after the second act, was rather puzzling and something, I´ve never experienced before. Also the cell phone going off 20 seconds into the prelude was new..

I´ve previously posted an extensive list of reviews and photographs from the premiere on July 25th here.

So Amfortas dies and Kundry lives. It seems the spirit of Lehnhoff hovers over this production.

Thank you for your excellent reports from Bayreuth! Although it may have been used by Wieland and Wolfgang in New Bayreuth, the phrase "Hier gilt's der Kunst!" first appeared on a notice that their father, Siegfried Wagner, posted outside the Festival Theatre in 1925. This was an attempt to stop the politicization of the Festival that had appeared a year earlier, when Winifred's right-wing friends used the Festival as a platform for their condemnation of the Weimar republic.

Quote:
“The distinct impression remains, that Stefan Herheim does not trust the power of the music and overworks (...) to create what is ultimately unnecessary and distracting action on stage...”

So, someone who doesn’t trust the power of Wagner’s music is paid to stage Wagner dramas in Bayreuth!

db: I have only seen one Parsifal production in which Kundry actually dies - Konwitschny´s production in Munich. I remember an interview with the Danish tenor Poul Elming, who has sung Parsifal all over the world, and he said he had never sung in a Parsifal where Kundry. I believe I´ve seen Amfortas die in some of the other productions, but I don´t remember without looking it up.

Daland: Well I am sure Stefan Herheim would disagree with me on that though..

I have no doubt about the fact you can do what you want when you produce Parsifal if it works artistically. But I am surprised that the producers who choose historic interpretations never dare (I am sure you will be able to correct me if I am wrong) to stage the historical Parsifal as it is interpreted by J. Köhler in “Wagner’s Hitler” (I don’t share all Köhler’s options but the book is challenging for a wagnerian ). You can choose the mythical interpretation, the religious one, the philosophical one, the moral one, but if you choose to deal with History, it is clear to me that Parsifal doesn’t give any redemption from the nazism as M. Herheim seems to think. Parsifal IS the nazi guy. This story deals with the purity of the blood. With threatened purity. Threatened by sex. Threatened by other people. Other races. It deals with restored purity. Restored by weapons. Restored by the disappearance of those other people (The didascalia says : Kundry slowly sinks lifeless to the ground). By a redemption which even concerns the Redeemer, who, as far as race is concerned, has a lot to be redeemed. Cristal clear…

I admit it would be difficult to produce such an interpretation in Bayreuth and I don’t deny the real opportunity of more optimistic visions. Somewhere else on this blog, you show an obvious –and justified- unease about the way the Wagner family deals with its past… You certainly noticed that, in the garden below the Festspielhaus, the monument dedicated to Ottalie Metzger and Henriette Gottlieb, two Bayreuth singers who were assassinated in the nazi camps, is just 10 meters far from Breker’s bust of Wagner…

Exactly. I´ve always wondered why no-one has ever dared put Nazism on stage for real in one of Wagner´s operas - including The Ring. That would be ground-breaking theater, instead of this psedo-historical interpreation with a happy end by Stefan Herheim.. I don´t think you could stage this anywhere in Germany, not even today, despite all the talk of radical interpretations.

One day, someone will do it in one of the smaller German houses, is my guess.

No I actually didn´t notice the statues, interesting to know..