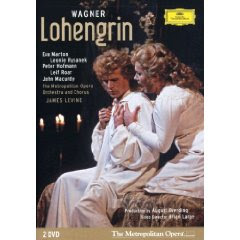 I was astonished (not in a negative way, say) by the absence of a swan in this 1976 August Everding Lohengrin production at the Metropolitan Opera. I thought a swan was compulsory at that address... at least in the pre-Robert Wilson era. Instead the light simply disappears in the corner of the sets, which are predictably traditional and dark, yet vastly superior to the Lohengrin sets at the Vienna State Opera.

Peter Hofmann´s vocal decline was obvious in 1986 (he was diagnosed with Parkinson´s disease a few years later), especially when compared to his 1982 Bayreuth Lohengrin. He certainly looks the part, but quite simply does not sing it well.

Eva Marton was Ortrud in the earlier run of this production, a part better suited to her than Eva. She is frequently flat and not overly exciting, though her vocal decline (starting about 1990-91) had not set in yet. But she is certainly no match for Cheryl Studer on both the Vienna State Opera and Bayreuth Lohengrin DVDs.

No matter how intense Leonie Rysanek´s acting is as Ortrud, she simply does not have the voice for the part lacking the necessary weight in her middle and lower voice, though surprisingly often (for her!) on pitch. I am a major admirer of Leonie Rysanek, but Ortrud simply does not suit her. And even in intensity she is no match for Waltraud Meier.

Danish barytone Leif Roar, the first Telramund I heard more than twenty years ago in Copenhagen, is dramatically excellent in a part, where you may get away with snarling and literally screaming quite a few of the exposed high notes. Though I wouldn´t mind hearing a singer able to sing them at some point..

James Levine, rather to my surprise, is masterful with this score, both spacious as well as exciting and dynamic, when called for. The irrititating superficial smoothness of his readings of Wagner´s later works (Meistersinger, Tristan, The Ring and Parsifal) is simply not here, a rather positive surprise, in my opinion.

I don't think there's a DVD of the Wilson Lohengrin from the Met but I wonder if you've seen it or are at all familiar with it.

The first time I saw it in 1998 I was more put off than by any production I had seen up to that time.

Musically that production has been superb both in the intitial run in and the revival in 2006. Levine's conducting was probably of the smoother variety about which you are less than enthusiastic but very satisfying for all that.

Mattila's Elsa was the outstanding vocal performance although Pape's small contribution as Heinrich was also worth hearing. Heppner was as good as I've ever heard him but not as good as RDS at Bayreuth and at Covent Garden (I often wonder why it is that Heppner has had the bigger career).

The Covent Garden version, however, was particularly notable for Meier's Ortrud, perhaps the most impressive performance I've heard form any character in any Lohengrin I've seen.

I am not familiar with Wilson´s Lohengrin, but I know of it and I know Robert Wilson´s work, which I suppose may be described as variations over a theme...

Hopefully I´ll see most of his Zurich Ring later this year.

I don't know if Bob Wilson has done more than one Lohengrin, I remember - rather vaguely - seeing a (the same?) production of that piece in Zurich, about 1996.
I only remember the late Gösta Winbergh, a very good Lohengrin, and above all Anja Silja (hubby von Dohnanyi was conducting), an unforgettable Ortrud, although the voice was already past its prime. The rest of the cast, I shamefacedly confess, I have totally forgotten (presumably most of them were from the Zurich troupe).
But the mise en scène, the production itself, was very beautiful, very static and hieratic, very much noh-inspired in fact. As I said, the memory is rather hazy, but what I do remember is very positive.

Bob Wilson's ring is a sham. Only nice colours from time to time. Don't let it bother you if you have forgotten your sleeping pills in Copenhagen.