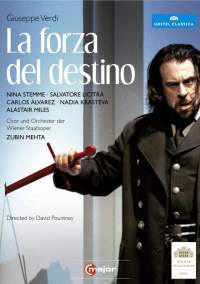 “The power of fate” - the butterfly effect - a butterfly flashes its wings somewhere initiating a chain reaction setting events in motion somewhere else. In this case the accidental shooting of Leonora´s father by her lover Don Alvaro, which sets the action in motion.

An elegant minimalistic David Pountney production held in white, black blue, plus the odd red colours and scaffolds. If you know Pountney´s work, you´ll know what to expect. I was present in the theatre during this run of performances in 2008, and I´ll have to say it comes over better in DVD than live as the close-ups and large video projections suit Pountney.
But not only that: Nina Stemme, whom I remember as rather unpleasantly-sounding in the theatre is still not really at her best, though vastly better here than I remember her in the theatre. Nadia Krasteva looked good and feisty and came off well vocally as well. As for the gentlemen, Salvatore Licitra, since then deceased in an auto accident, sang with a warm tone while Carlos Alvarez made an effective "villain".

Zubin Mehta you may judge yourself in the ouverture /symptomatic for the take on the work) below: 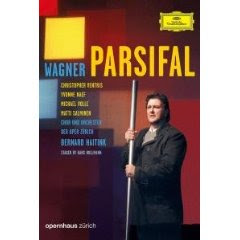 This Parsifal was recorded live at the Zurich Opera House in April 2007 during the run of performances, of which I attended one.


Hans Hollmann´s production is from 1996 and has now been replaced. Hollmann presents what I consider an essentially religious view of the work: Mist and light. Water, purification? Abstract, quadratic and aesthetic designs. Hollmann says: "Wagner presents only possibilities - Parsifal can never be wholly fathomed by interpretation."

Well said. However, Hollmann seems to have restricted, rather expanded on Wagner´s work, though the simplicity of the sets rather act as a backdrop for Wagner´s glorious music. Not the worst interpretation at all, but also not ideal: In both Act 1 and 3 we are in a 19th century class-room. Mist, water. On the wall : Wasser. Later: Blut. The knights are blind. In Act 2 a mirror flips in Klingsors imaginary castle surrounded by candelabres. We could be in Musée des Art et Métier in the middle of an Umberto Eco novel.

Bernhard Haitink was never a favourite of mine, though he probably is the raison d´etre for this DVD. Some find him close to ideal in this repertoire. To me, he lacks a certain ggrandiosity and above all the sense of dynamics. Both Barenboim and Thielemann, among the presently active conductors have this. Haitink lingers too long in the middle ground without approaching the extremes. Valery Gergiev, coincidentally, presents with much the same type of reading on his newly released Parsifal CD.

Yvonne Naef is a wonderfully darkvoiced and secure as Kundry, but rather restrained on stage and nowhere close to Waltraud Meier´s definitive Kundry. Christopher Ventris is a fine Parsifal, but the best performances come from Matti Salminen and Michael Volle.
Salminen has one of those voices which just ages wonderfully well: No wobbles a la John Thomlinson, but instead he has kept his firm steady tone, His stage presence, of course, is intact.
And Michael Volle, just about ideal for Amfortas and probably the best Amfortas I have heard live.
Adequate justification for a DVD? Probably not. Why would one return to this version, now that we have Barenboim/Kupfer? Not for Salminen, who can be seen on the Baden-Baden DVD with Waltraud Meier, though I do find Haitink superior to Kent Nagano. And next month we will see the new Met Parsifal with JonasKaufmann and René Pape, probably to be released on DVD as well, which will be a strong competitor unless the staging turns out to be completely hopeless.. 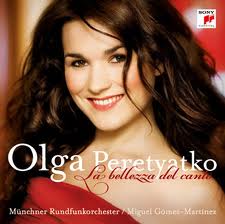 Olga Peretyatko is a Russian soprano, born in St. Petersburg 1980. Initially in the childrens choir at the Mariinsky theater, she received her formal training at Hans Eisler Hochschule für Musik in Berlin. Between 2005-7 she was a member of the Young Artist programme at the Hamburg State Opera and has continued as a freelance from then on. Earlier this year she jumped into the opening of Elisir d´Amore in Baden-Baden and her career is definitely on the rise with a Metropolitan Opera debut in the 2013-14 season as Elvira in I Puritani.

Based on this CD it is clear why. Hers is a very clear soprano with a distinct quality in upper middle register and a clear top.

La bellezza del canto is the sort of CD equivalent to a business card. While personally I prefer lieder disc or orchestral songs, artistic entities opposed to a mish-mash, it wouldn´t be fair to Olga Peretyatko to blame her for a rather conventional choice of arias (Gilda, Olympia, Manon, Don Pasquale, L´elisir d´amore),
She shows how she performs in work she potentially would be engaged to perform at stage.

And obviously it is easier for a casting director to judge her on that than try to suss out how her Gilda would be based on a song compilation of Messiaen. And for members of the general public to have an idea about her voice.

So for a presentation of Olga Peretyatko, this is as good as can be. And as she definitely qualifies as a rising star, now may be a good time to acquaint oneself with her. 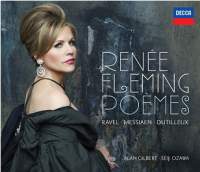 At this point of her career, I´d say that original writing on a Renée Fleming release is virtually impossible. Unless, of course, her performance on this disc is different from her usual type of performance. Or her voice/her interpretation is different from what she showed us on her last disc. Which it isn´t really.
Yes, she has, or rather she had one of  the most glorious lyric voices of this century. Yes, she is somewhat past her vocal prime easily proven by listening to her recordings up through the 1990´s and early 2000, such as those with Solti. And yes, her vocal style is quite specific and either you like it or you don´t, in which case you´d call her singing mannered. All of this has been pointed out previously by myself and others, and more than once..

However, all this taken into account, some of her releases are still better than others. And this present CD is probably the best I have heard from her in years. Not the least due to the repertoire presented, which is quite simply excellent. And as for style, she is far less mannered, you may say, than she is on her recent Richard Strauss recording with Christian Thielemann.

Yes, there are better recordings of Scheherazade, among the more recent Veronique Gens and Magdalena Kozena, on the market. Also, Poemes pour Mi have been better done though not excessively recorded: Anne Schwanewilms as well as Francoise Bollet with Pierre Boulez in the orchestral version as well as Susanna Philips with the piano version are all superior to Renée Fleming.

Dutilleux´ 14-minutes song cycle is written for herself, and as this is a world premiere recording, there obviously is no competition, but Fleming nevertheless impresses in this work with impressionistic qualities.

However, because of Renée Flemings status this will probably be a benchmark recording within this repertoire, especially the Poemes pour Mi, which really is an exceptional song cycle deserving to be performed much, much often.