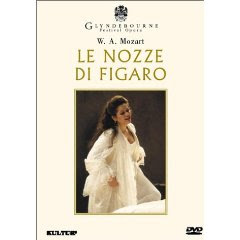 There is a childlike simplicity to this Glyndebourne staging - doll-house interior, baroque furniture, period costumes. Thus, the prodution is not entirely traditional. Neither is it modern. Unfortunately it also lacks a clear take on the work.

The beautiful voice in it´s prime is surprisingly not the superb Countess I´d expected. Vocally, Renée Fleming makes too many artificially sounding portamenti and odd tempo changes. Furthermore, she has gone through a major dramatic development since this was recorded in 1994. Additionally she lacks energy and looks very heavy and exhausted (pregnant?). More energy comes from the way of Alison Hagley´s fine Susanna. Andreas Schmidt is the noble Count, with the noble and beautiful voice. And while Gerald Finley´s roguish Count from the recently released Davic McVicar production is hard to forget, he was superb even in 1994 as Figaro.

Your profile says that your blog is a Mozart-free zone. Obviously not.

I can't get to operas and rely on DVDs, so I really appreciate your reviews with the excerpts.

Frankly stunned by Fleming's disappointing Countess. I'd heard her at the Met earlier that year and was absolutely blown away. Simply the perfect Countess: full stop.

To be sure, that was my first Figaro in the theater, but even at that time there were performances which I didn't like and her Countess could not have been (and in my experience has not been) bettered. When I saw this on VHS several year later I was surprised and at her lackluster and somewhat, as you say, mannered performance here.

(Morris was also an excellent Figaro).

While this is an old post, I thought I'd provide you all with an answer to the question asked in the review: Pregnant? Yes, she was pregnant at the time. 6 months pregnant, I believe.