Paris: The 2003 Salome with Karita Mattila 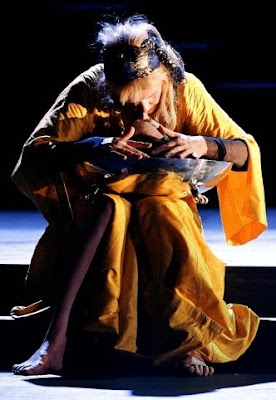 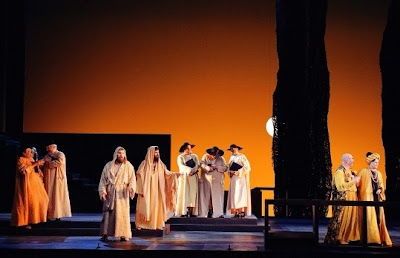 The production is certainly stylish, though perhaps not as inventive as Jürgen Flimm´s, which some may undoubtedly find an advantage. Admittedly, Lev Dodin doesn´t seem to contribute an excessive numbers of ideas to this Salome: The single set is pictured above and consists of a blue-yellow-reddish courtyard with a sideways moving moon in the background and Jochanaan located in a floor-level cage, sliding in and out of view.

Any drama in this production thus relies on the protagonist and needless to say Karita Mattila did not disappoint, with captivating acting on par with her MET performances and arguably in better vocal shape, though she is clearly approaching her vocal limit. And she does undress as well, except for a transparent black top..

Basically a one-woman show, however neither of the accompanying artistst (particularly Falk Struckmann in rather fine shape and Anja Silja with her usual presence) disappointed. And James Conlon presented a much more interesting reading of the score than any of the recent MET Salome conductors (Patrick Sumners and Valery Gergiev).

Labels: karita mattila, to be relased on dvd?