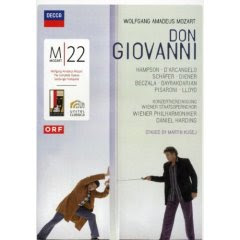 Set on a revolving white stage with multiple rooms, this Don Giovanni is about existential loneliness, emptiness, superficial sexuality and death. Don Giovanni is "a living hurricane of chaos and anarchy" who must "devour other people´s existence to prove his own worth" (Thomas Hampson). Semi-naked models parade as an amorphous mass. Very appropriately the "Deh vieni" is adressed to no-one (originally Don G sings this to Elvira´s maid) and when the song is over, the stage goes dark.
Such existence is not compatible within modern society, which is why Leporello kills him in the end, about 10 seconds before he would have died anyway, though. This Don Giovanni is someone you simply want to diesappear. However Leporello and Don Giovanni change recitatives as well as clothes - two of the same sort obviously.

Apart from the fact that I prefer a basso cantante as opposed to Thomas Hampson´s lyrical baritone, Don Giovanni is one of his best roles. While I find his work in repertoire such as Macbeth, Simon Boccanegra and Amfortas downright irritating, he seems much closer to his artistic core in this repertoire, also more suitable for his voice. Furthermore he is a superb actor and commands the stage.
Ildebrando D'Arcangelo as Leporello is energetic and looks great onstage, both of which goes a long way to compensate for the fact that his voice is not very pleasant.

Christine Schäfer is lighter than usual as Donna Anna, but very stylish. Melanie Diener was in more trouble as Donna Elvira, but neverthess fine. Isabel Bayrakdarian was superb as Zerlina, while Robert Lloyd was slightly more irritating than usual as the Commendatore. Piotr Beczala gets away with Don Ottavio without being irritating - not a small accomplishment.

Upon repeated viewing I must admit to tire of Daniel Harding´s reading - initially I found it dynamic, now I cannot help feeling he competes with Bertrand De Billy in presenting a Salzburg Don Giovanni with as few ideas as possible. You may not like all of Nikolaus Harnoncourt´s ideas. But at least he has plenty to chose from.

Musically, the best DVD is the Furtwängler performance, if one is up for watching the old film. If not, this is not a bad choice at all.

Nobody dares to admit it publicly but there is a dramatic problem in Don Giovanni. It is the beginning of the 2nd act -before the scene in the cemetery- which can easily be boring after the excitation of the 1st act. The only solution, in my opinion, is to give to this moment a poetic characterization. It is the night, nobody knows who is anybody, there are shadows, dreams, fears... and so on. And Kusej, with his schematic and cold settings, completely fails there. But the rest is interesting. Even the provoking final scene.

I was a little disappointed with Hampson. I think we begin to feel here his vocal decay. D’arcangelo and Pisaroni are excellent. The women, well... They are dramatically convincing but I am half-hearted with their musical performances. Diener is a nice singer but she is more at ease in Chrysothemis. And Schäfer sings Lulu better than Donna Anna. If Schäfer and Diener (and Bayrakdarian) were considered as representatives of the mozartian singing, it would be a terrible sign of decline…

Its unfortunate that this was recorded in 2006 (I realize the 250th anniversary imperative) because on balance the production was much better in 2002 and 2003.

Hampson and d'Arcangelo (whom I like a little better than you do, I think) were slightly better and Netrebko and Kozena (02) were preferable in their roles. Diener was sick and missed a couple of performances so she is no more fairly judged here than Dasch in this year's Giovanni.

I have not seen the DVD but in the theatre I absolutely prefered Harding to DeBilly. The former also elicited much better orchestral playing. I do agree that Harnancourt, irritating in many passages, did present the far more interesting reading of the score.

Completely agree with NV, expecially for female voices considerations (mainly on zerlina)...that's surely not the way to sing mozart, and harding is in part guilty of this...
Pete

The only solution, in my opinion, is to give to this moment a poetic characterization. It is the night, nobody knows who is anybody, there are shadows, dreams, fears... and so on. And Kusej, with his schematic and cold settings, completely fails there. But the rest is interesting. Even the provoking final scene.