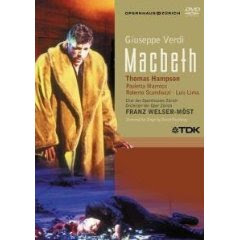 That an opera production is weird is no problem as such. However, David Pountney is simply not at his best with this Zuric Macbeth staging. He has created several superb stagings of lately, such as Peter Grimes and Turandot, however for some reason, this Macbeth misses the boat. And rather surprisingly it is not even stylish, normally a trademark of Pountney´s.

That Banquo´s blood is green is simply odd. However, there could be a perfectly reasonable explanation for that, and it does fluorescate rather intriguingly when smeared all over Macbeth and the lady...But in an unaesthetic way oddly corresponding with the rest of the sets.
Furthermore, I do not get any insights into the characters motivations or relationships. I do not doubt that David Pountney has the ideas. He just doesn´t convey them to the audience.

Thomas Hampson is a highly intellectual singer, always performing immense amounts of background searches for his characters apart from speaking some of the best German I´ve ever heard from a native English-speaker. Furthermore he looks rather good - in the documentary, that is. As Macbeth he both looks and appears irritating and pathetic. Perhaps because his character, Macbeth unfortunately is irritating and pathetic- almost bordering on a self-parody. And because they made him wear a wig, which simply does not suit him. Vocally, this is not his turf either - there has to be more ring to the part to make it work.

Roberto Scandiuzzi may have been a good singer once. Paola Marroccu could have been a great Lady Macbeth now, had she not been consistently flat and had her voice not had a distinctly grainy quality not really to my liking. However, she is not at all uninteresting and creates genuine drama on stage. The audience seemed to adore her.

Franz Welser-Möst = As reliable as ever.