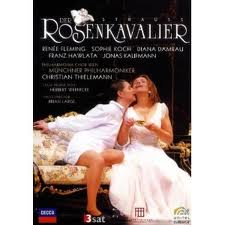 This production has so many things going for it and yet somehow it narrowly misses the mark.
First of all, Herbert Wernicke´s production is wonderful: First seen in Salzburg 1995 and later in Paris, it is visually superfluous and sumptuous making use of a back wall of rotating mirrors. Traditional in outlook, Wernicke simply tells the story in a seemingly timeless manner.
Renée Fleming is the Marschallin. Or as I originally intended to write: Renée Fleming is Renée Fleming. There is too much Renée Fleming in her Marschallin or perhaps too little Marschallin in Renée Fleming. Word games apart, this is not among her best roles in my opinion. Somehow she seems to artificial, too mannered and not sophisticated enough in her portrait. There is a subtle balance to the Marschallin and she does not nail it. Disappointing, since I have seen her give wonderfully committed performances in this repertoire. But extra points to Ms Fleming for giving interviews in German.

Sophie Koch, somewhat miscast being too feminine in both expression and singing and with too much vibrato especially in the higher register, her weakest, where a lot of the notes are. A wonderful Charlotte is rarely a wonderful Octavian. Diana Damrau sings beautifully, but she has really moved on from Sophie. Quite a few sopranos aged below 30 could have pulled of the same in addition to portraying a young and innocent Sophie, which Damrau does not.
And Franz Hawlata, in his second Rosenkavalier DVD lacks the crudeness and (most importantly) the deep notes.

Not to forget to mention Jonas Kaufmann´s brief appearance as the tenor.

Christian Thieleman is a superb Straussian Thielemann, but he conducts Rosenkavalier as he does Die Frau Ohne Schatten: Grandious, serious, transporting. Where are the bubbliness and the walz rhythms?