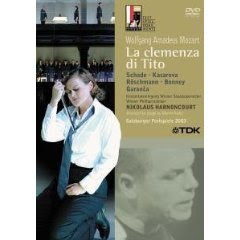 Martin Kusej created a close to ideal staging of Mozart´s opera La clemenza di Tito for the Salzburg Festival 2003. Even those looking for a traditional Tito (which this is certainly not), I wouldn´t advise immediately to look elsewhere as the vocal performances are simply superb, in particular the casting of the central trio of Dorothea Röschmann-Vesselina Kasarova-Elina Garanca, which may stand any test of time.

Martin Kusej imaginatively incorporates the intrinsic stone arches of Salzburg´s Felsenreitschule in the sets as small spaces inhabited by the various characters, emphasizing the dark aspects of the work, such as isolation and betrayal. Otherwise the stage is virtually naked, to be lightened up by some spectacular light effects surrounding the fire/assassination attempt on Tito, predicably deemed superficial by the Austrian press.

Nikolaus Harnoncourt´s ideas may not be for everyone, but once you have heard a Mozart opera conducted by a conductor without ideas, most will come to appreciate any idea at all. As it is, I rather like Harnoncourt´s ideas, relatively slow tempi, though diverging from the norm to the degree of his Nozze di Figaro a couple of years later. The recitatives are exciting, not least due to the superb singing-actors.

Personally, I´ve never taken to trouser-roles in opera, however it´s hardly something to blame on the production or the artists. Nor that the second act seems to drag on quite a bit...

All six soloists are simply excellent: I cannot imagine a better pair of friends than Vesselina Kasarova and Elina Garanca. Elina Garanca sings mainly in the lower ranges as Annio and she is a very convincing trouser-role artist (as Octavian as well). The slight androgynity of Vesselina Kasarova I´ve always found curiously intriguing in trouser roles, and vocally she is nothing short of perfect. Dorothea Röschmann is the over-wrought Vitellia in a performance I simply cannot imagine being bettered. The chemistry between these three are unbeatable. In comparison with these great ladies, Michael Schade´s Tito seems slightly less exceptional, though it seems like he is supposed to be insane, which may obviously explain a bit.

I cannot imagine a better performance of Tito on DVD.

One of the best opera DVD on the market...

Too modern version, a bit exaggerated.

A highlight of this performance is the love duet between Annio and Serviglia, Ah, Perdona Al Primo Affetto, sung by Garanca and Bonney. There are equally good vocal performances of this duet available by other artists, but the combined effect of the direction, acting and singing here is uniquely inspired and beautiful.