Macbeth on film with Leo Nucci and Shirley Verrett 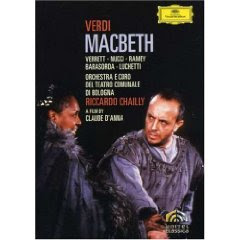 The bleak 10th century fortified castle of Godefroy de Bouillon in Belgium is a remarkably convincing stand-in for a medieval Scottish castle and a fog seems to enshroud everything is this very successful filmic adaptation of Verdi´s Macbeth. In fact, this may best be considered a film of the story of Macbeth with Verdi's music as a soundtrack. Though I didn´t find Claude D´Anna´s insights particularly interesting in the accompanying documentary, they translate into an extraordinarily successful opera adaptation. One of the best I have encountered on film. The entire dark medieval setting of Macbeth is captured at almost the same superb artistic level as seen in The Name of the Rose.

If I had bothered to read the booklet beforehand, I wouldn´t have spend the first act wondering how this dashing young Banquo managed to sound almost exactly like Samuel Ramey. As it turned out, Samuel Ramey was of course singing while Johan Leysen acted the part.

Leo Nucci, in his first Macbeth, is simply excellent, vocally as well as dramatically and entirely believable as the weak man overpowered by his fabulously strong as well as bloodthirsty wife in the shape of the magnificent Shirley Verrett. Riccardo Chailly is as good as any with the
Orchestra e Coro del Teatro Comunale Bologna.

Highly recommended as an introduction to opera as well as for fans of Macbeth, which I, by the way, consider the third most interesting of Verdi´s entire operatic output, right after Otello and Don Carlos. I´d say this is the best Macbeth production available on DVD.

Very happy to read your review. The french critics, who had been full of praise twenty years ago, were devastating when this DVD was released (dark, old fashioned, tacky...). I couldn't believe I had so bad taste! But as I am not alone...

This DVD has been on my ‘to get’ list for a year, so was happy to read your excellent blog and, now I’ve seen it, agree as well!
The only caveat : I do not like seeing an actor portray a role that is sung by another. The two ‘dubbed’ roles here are well enough performed, but it’s a shame we couldn’t have had Luchetti and Ramey ‘in the picture’ – especially as they sing so well.
In general, filmed (rather than staged) operas don’t always work too well, but this one does, and Verrett and Nucci would be hard to beat in the two main roles. What a feast for the ears!
One remembers fondly Amy Shuard and Renata Scotto at Covent Garden as the wicked Lady (yes folks, I am that old!!) but Verrett is glorious.