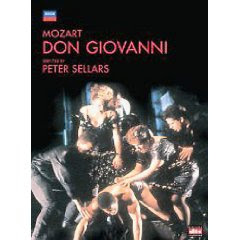 Professional self-proclaimed provocateur Peter Sellars sets his 1990 Don Giovanni film in Spanish Harlem, New York City, in a ghetto setting, which works surprisingly well with reference to the original libretto: Don Ottavio as the under-cover police officer, Donna Anna double-crossing him (as well as being a heroine addict, shooting heroine during Non mi dir). Don Giovanni and Leporello are barely distinguishable from each other (they are played by twins as well) as low-life criminals. Furthermore it is very dark throughout.

The question is not whether this will be/was/is considered controversial but rather, if it works? The concept certainly is interesting, but as everything else it is a product of it´s time and thus a certain dusty atmosphere is almost inevitable. A matte of Zeitgeist, supposedly.

That said the singers are superb, especially the Perry Twins, but most of all Lorraine Hunt (Lieberson´s) as a superb Donna Elvira.

I guess that the opera fans who especially like the divas are
"heroine addicts."