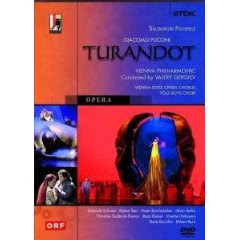 In brief, director David Pountney dismisses of all kitsch in a spectacular staging of Turandot created for the 2002 Salzburg Festival.

David Pountney elaborates on the widespread fear of the 1920´s that technical advances would spin out of control resulting in the swallowing of individual into a massive grey mass.

The spectacular sets by Johan Engels gradually transforms an "inhuman state only capable of murdering" (Pountney) to one of humanity. Cogweels in motion span the entire stage width as well as the side of the orchestra pit. A technical world populated with robots and mechanical humans. Grotesque chinese mask represent the local colorite.
Turandot, trying to expel all human thoughts and feelings, hides on top of a 9 meter veil within a gigantic golden human head. This obviously crashes and brings her to stage level when Calaf solves the third riddle, frail-looking and in a white cloth.

The riddle scene is spectacular with Turandot placed high above a blood-red graveyard within the golden head an with the almost equally high positioned robots of the Emperor and the Mandarin, his mouth piece at the front. Turandot´s change to compassionate human being seems finally complete upon washing the dead body of Líu. It all ends in social utopia - everyone shred their masks and the instruments of torture are discarded.

As most will know, Puccini didn´t complete the opera before his death and here Berio´s new 2001 ending is used, which has the major advantage of Berio not trying to adopt a pseudo-Puccini language not his. A very and sincere ending to Turandot, vastly preferably to Alfano´s version, in my opinion.

Gabriele Schnaut gets reasonably away with Turandot. That Johan Botha is not really suited to staged theatre is not new and here he seems strained in the top as well. Cristina Gallardo-Domas is a very sincere Líu, who unfortunately comes with a rather unpleasant vibrato. Paata Burchuladze gets away with Timur only because the part is not very challenging.

Valery Gergiev is most of all very loud. There is not much else to say about him in what is far from his finest hour.

I find this Turandot a little too raw, not only for my tastes: I think that Puccini requires (and deserves) more subtlety and finesse.

On Amazon most reviewers hated this production, calling it the "Borg opera" but I think it works as a commentary on the dehumanization of society, and the ambivalent ending also works; Turandot is taken to task for her sins, and there's some unfinished business. Visually it is stunning and unforgetable.

In writing that I find this Turandot "raw", I mean musically. For this I blame Gergiev. Visually, I agree with Mostly and the anonymous above.