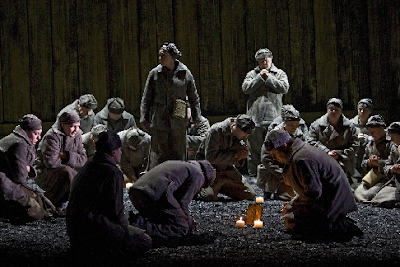 
This new ENO production of Boris Godunov opened on November 10th to a music press predominantly focusing on the facts that:
The original 1869 version was played, which they found of lesser quality than later versions which include the Polish scenes as well as allegedly superior orchestrations by either Shostakovich or Rimsky-Korsakoff; the original version is very dark; the opera runs 2h 10 min without intermission; Peter Rose does not have the charisma of John Tomlinson; this Boris is more despressing than uplifting.

In brief, I agree with all of the above comments, though reaching somewhat different conclusions: Yes, there is nothing uplifting about Boris Godunov. And this is exactly the way it should be: Raw, unpolished and depressing. Which is why I personally prefer Mussorgsky´s original score in the 1869 version, though I am not adverse to the gleamingly brilliance of Rimsky-Korsakoff or the beauty of the Polish scenes. However, in the 1869 version, what remains is exactly what I perceive to be the core of Boris Godunov: The plight of the Russian people and the portrait of Boris´ inner struggles.

Admittedly Peter Rose does lack charisma as Boris and the death scene never becomes truly gripping. His Boris seems a very docile and gentle man indeed, entirely incapable of orchestrating a child-murder or even aspiring for power. On the other hand his voice is quite beautiful and, while his expressive range may be somewhat limited, he is always a pleasure to listen to. Which Sir John Tomlinson, for all his charisma, is not.

Tim Albery´s single minimalistic set seemed relatively unanchored in time, taking place within a structure of wooden walls serving as backdrop throughout the opera. The only colouring was provided by the various dresssing of the characters, such as the black vs. white uniforms used by the opposing parties in the Final Scene. As such, it worked well, however I missed a directorial take on the piece. What are the power structures in this Boris? What influence does Shuisky have? What about the False Dmitri? Or what role does Pimen have?

Admittedly, neither of this supporting cast were overly charismatic either, perhaps with the exception of Brindley Sherratt´s rather fine Pimen. And Jonathan Veira was more than adequate as Varlaam in what is all things considered is a rather fine trio of basses.

The translation by David Lloyd-Jones deserves a comment as well: It was unusually straight-forward and impressive in the ability to catch the rhythm of the score. I do prefer Boris sung in Russian, but clearly an English-sung performance has certain advantages, such as not having to rely extensively on the texting device to understand what is being sung..

Superb was Edward Gardner in a very lyrical reading of the score, which nevertheless was impressively coherent. Ideally I´d prefer a bit more punch and eeriness, but this was as good an orchestral performance of Boris as I have yet heard. 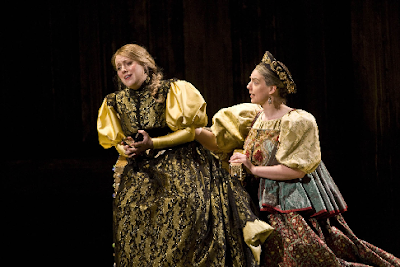