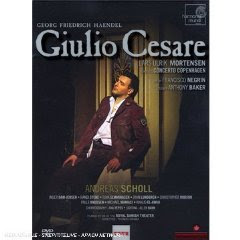 Francisco Negrin´s production of Giulio Cesare was a massive success for the Royal Danish Opera in 2003, resulting in several people queuing overnight for tickets for the 2005 revival, something previously unseen in Copenhagen. On paper Andreas Scholl was the star, but the production proved a genuine team effort, with superb performances from all involved parties, not least the exceptional baroque ensemble Concerto Copenhagen.

First of all, Francisco Negrin´s production is simply superb. Both minimalistic and stylish with appropriate Egyptian paraphernalia, the story is told straight-forward with a wonderfully sly sense of humour. Negrin is furthermore a superb personal director, convincingly conveying the interactions and emotions of the characters. The video clip below provides just one example of how he furthermore manages to make full use of the arias in the characterization of the protagonists.

Andreas Scholl is simply ideal as Cesare. His coloratura technique is fabulous and his voice has the well-known white glow, even througout the entire register. Most importantly, however, he is wonderfully masculine on stage. And a superb stage actor, with considerably comic timing.

Inger Dam-Jensen is a both captivating and elegantly sensual Cleopatra. That she vocally may be slightly on the dry side is rather easy to overlook.

Christopher Robson Tolomeo looks terrifying and counter-tenor purists may well not take a liking to his singing: Vocally he is rather strange, using chest-voice as a main method of expression and he is probably past his prime. Though as a dramatic portrait, I find him very convincing.
Strong performances also in the smaller parts, such as Palle Knudsen as Achilla and Michael Maniaci as Nireno. Maniaci, by the way is a true male soprano, with no Adams apple (due to a developmental error), but a male in every other way.

Lars Ulrik Mortensen with the period ensemble Concerto Copenhagen are precisely imprecise with an impeccably sense of rhythms and energetic throughout in a performance I cannot imagine bettered.