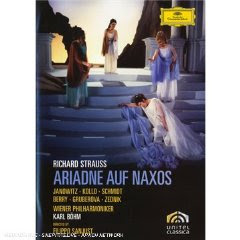 The cast is spectacular. Most of all Edita Gruberova. And (if only vocally) Gundula Janowitz. Not to mention Karl Böhm. The film is boring. Period.

This Ariadne auf Naxos film was based on the 1976 production from the Vienna State Opera. Why they simply film did not film a live performance is a riddle. Especially since the director did little to take advantage of the new medium, leaving the impression of a stage production hastily transported to film. Lip-synching is a bit of a problem, as is often the case, but not all of it.
The singers stand and deliver their lines while addressing the cameras. There is no interaction to speak of between the characters, not to mention the audience of a live performance, which is sorely missed. What on stage may have been lively and spontaneous, has become static and odd.

The set is the classic backstage of a villa with the Greek iceland behind a flight of marble stairs.

Few will contest that this Ariadne comes with an A cast and furthermore is conducted by one of the great Straussians.

First of all, there is Edita Gruberova. She completely nails it with the best Zerbinetta I have ever heard, including a fabulous "Grossmächtige Prinzessin". This is the only chance to see her Zerbinetta, and for this reason alone it´s understandable if some may not care about anything else. Edita Gruberova steals the show providing both singing and acting. Gundula Janowitz only provides singing with her immediately recognizable over-earthly beautiful voice.

The relatively unknown Trudelise Schmidt performs on the same high level as the Composer while René Kollo does the best he can with the thankless part of Bacchus.

Karl Böhm, once again demonstrates that he is a wonderfully no-nonsense Straussian.

A shame that all these wonderful performers have been embalmed for eternity in this boring film, but nevertheless good that they are there to watch.

Edita Gruberova "Grossmächtige Prinzessin" - from the live Vienna production 1982 upon which this film is based:
The bottom line (scale of 1-5, 3=average):

Direction of the film: 2