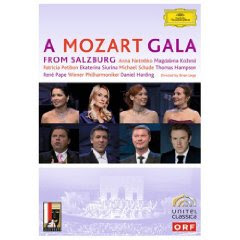 The overall quality is impeccably high, however I have to admit, that no matter how perfectly brilliant the individual performances, I find these things tedious to watch.
That said, several of the performances were indeed perfectly brilliant (René Pape with the Catalogue Aria, Magdalena Kozená with "Parto, ma tu ben mio", Ekaterina Siurina with "Se il padre perdei") and none were less than fine. Anna Netrebko finished the singer´s part of the show with an engaging delivery of "D´Oreste, D´Ajace".

All engagingly accompanied by Daniel Harding, who finished the evening with a straight-on delivery of Mozart´s Prague Symphony (personally I would have preferred some more singing, however).

The occasion, of course, was the 250th anniversary of Mozart´s birth, which was celebrated at the Salzburg Festival in 2006 with DVD releases of his entire operatic output. As well as this gala concert from the Felsenreitschule.

If I liked this sort of thing: 5