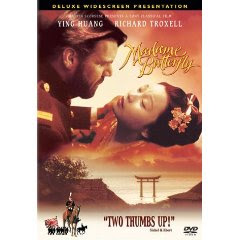 Shot on location in Tunesia, everything in this film evokes the romantic Japan: From the beautiful landshapes to the shots of the overly romanticize daily lives of local people to archive footage of Nagasaki of the past underlines the distance between the 15-year-old Geisha-bride and Pinkerton. Oddly enough, in this "realistic" production, the director chose to have Butterfly's uncle crash the wedding celebration as a supernational figure floating in the air, completely out of context with everything else in the film. And purists may also not like the fact that Butterfly dies in the arms of Pinkerton in the end.

Chinese soprano Ying Huang is vocally in fact entirely inadequate for this part by operatic standards, however her heartfelt expression and very small and lyric voice most effectively portrays this 15-year old Geisha. She was apparently chosen amongst more than 200 oriental sopranos.
Richard Troxell's Pinkerton, also perhaps not vocally first-rate by operatic standards, is both vocally and visually charming as well as superficial. Richard Cowan´s Sharpless and Ning Liang´s Suzuki were wellcast and generally all singers demonstrated impressive acting skills. Conductor James Conlon is probably the only one capable of taking his perfomance directly to the opera stage, but as an opera film, it all blends together beautifully.