Aneas, or Enée in French, was a hugely challenging role, one of the biggest challenges in my career. It was a special role for a special occasion, the centenary of the Met in 1983. I decided to do it and although I harbored some doubts until the last moment, I am very happy with the result..

The reason this part is considered one of the sacred monsters of the tenor repertoire is its lenght and tessitura. The latter is consistently high and often hovers on the passaggio. You also have some very strenous high notes to sing...

In our case almost everyone was satisfied, except for some critics who carped at the fact that I transposed the high C and the last few bars of Aneas´ last aria, the Farewell Aria... the fact that that´s all they found to say about it made me sick. So I thought, if that´s all they feel I have to offer, let them have other tenors! So I sang a few more performances and then withdrew..I have not sung it since

It is exactly because of the very high tessitura of the part, that I was very surprised to see Jonas Kaufmann decide to take it on for the upcoming (June-July 2012) production of Les Troyens at the London Royal Opera. I am equally not at all surprised that he has now cancelled, though the reason for the cancellation is stated as tracheitis, which I have no reason to doubt. However, that said, the tessitura of Aeneas really is very high for him and he´d definitely have to be in top shape to do it.

Jonas Kaufmann will be replaced by Bryan Hymel, who sang Aeneas in Pierre Audi´s 2010 Amsterdam production.


And Placido Domingo with the same aria (and Tatiana Troyanos), The Met 1983: 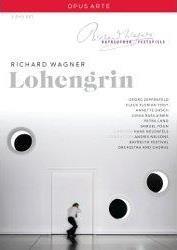 Lohengrin as a laboratory rat experiment. Not as silly as it may sound. In fact, director Hans Neuenfels has created a vastly interesting as well as moving production of Lohengrin – conceptually by far the most interesting available on DVD and probably the overall most interesting I have yet seen.

We are inside a white laboratory. The people are rats. The protagonists seem to be super-rats. Or perhaps not all of them. Lohengrin, who struggles in vain to enter the lab during the vorspiel, and Telramund, whose narration is accompanied by a projection of “wahrheit” may have be placed in the lab as part of the experiment to see what reactions they provoke. Or maybe not. Because nothing is entirely clear in this challenging production. The lab technicians seem to be always in control, entering and exiting the laboratory manipulating with the rats.
Black-white, action-reaction, the people are rats and they are followers. And they chose to follow Lohengrin, gradually changing their rat-like appearance into human shape. And who should Elsa follow? Brought in by the rats, covered in arrows, she takes shape according to her surroundings – rats, swan, Lohengrin. Love is not an ingredience in this experiment.
A tilted wagon, a dead horse, rats escapint with gold bars and money: Ortrud and Telramund are caught by the rats when trying to escape.  But why exactly Telramud becomes a rat after his failed attempt to kill Lohengrin is less clear to me. And who is this Schützer von Braband? An embryon capping his umbilical chord. As a reaction to the experiment, perhaps?

Lohengrin as an experiment of how we react to authorities. Not at all uninterersting, as a matter of fact probably the conceptually most interesting Lohengrin I have seen to date as it captures the primitive action-reaction, hero-antihero as well as black-white patterns somehow inherent in the plot. The sets are aesthetic, the colours are clear and beautiful. The answers are by no means obvious and this multilayered production probably requires repeated viewings by most to capture the essence. Whatever that may be perceived to be.

When the production opened in 2009 Jonas Kaufmann was Lohengrin. In 2010 Klaus Florian Vogt took over the role and this is thus his second Lohengrin on DVD. With clear ringing notes Klaus Florian Vogt is superb, a “tenorial” Lohengrin far from the sound we have been used to from Plácido Domingo as well as Jonas Kaufmann, and both vocally and physically perfectly suited to this production. He may even have lost some of his eeriness these past few years giving place for a rather human interpretation.

Unfortunately Annette Dasch is by no means a first-rate Elsa. Unable to sustain a legato line, often out of breath, shrill and with no bloom and warmth in her tone. That she looks fabulous capturing the essence of eery passivity that Neuenfels undoubtedly wanted does unfortunately not outweigh her vocal short-comings.

As Telramund Jukka Rasilainen has the appearance but not quite the voice, while Petra Lang is a better Ortrud than almost anyone else I can think of today.

Accompanied by a swift and spirited performance from Andris Nelsons, this DVD is a must for those interested in contemporary performances of Richard Wagner´s work. Though for those less familiar with the work probably Lehnhoff´s aesthetic, rather straight-forward production from 2006 may be an all-round better choice. Or even the Claudio Abbado conducted 1990 production from Vienna - visually dreary but musically superb.

Elsa´s call and the appearance of the Swan: