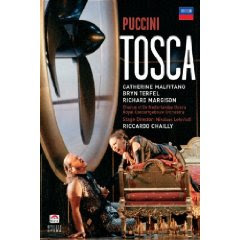 Those impressed by Nikolaus Lehnhoff´sk statements such as "existence itself has become the human death-trap" may well be impressed by this Tosca. Needless to say, I am among the least impressed. In my opinion Lehnhoff´s staging is kitsch. Stylish kitsch in a decadent environment, glitzy clothings and a myriad of death-traps. But nevertheless kitsch. A thriller, most evident in making Scarpia´s dungeon a death trap from which Tosca nearly does not escape. In that context I´ve often wondered why I´ve never seen a staging of Tosca where Scarpia does not die, but simply returns to kill Tosca in the end. Surely, if Tosca was a modern thriller this would be the way things would play out.

Not here though. Lehnhoff follows the drama quite closely. The church-dungeon-prison sequel is unchanged in this intended symbolic setting aimed at evoking a feeling of claustrophobia and omnipresent threat. But ultimately not succeeding.

Who cares that Richard Margison is not the Cavaradossi of most Tosca´s dreams. It´s worse that Catherine Malfitano is not the Tosca of most Scarpia´s dreams as she is vocally ordinary with far too much vibrato and far too little radiance on stage.

That leaves Bryn Terfel. I´ve read reports claiming he outclasses all competition back to and including Tito Gobbi in this part, being the master of subtle evilness. Agreed, Bryn Terfel may appear slightly unpleasant, but in the way of a second-rate criminal, not as the incarnation of evil. Or rather, if he is the incarnation of evil, he plays with such subtleness, that I fail to perceive it. Apart from his appearance, the problem is that Bryn Terfel essentially has a lyrical voice. He does command the stage. But there is nothing menacing or diabolical about Terfel´s Scarpia.
Are there plenty of vastly superior Scarpia´s around today? No. Are there any at all? I am not sure. Perhaps not. Are there any on DVD? Yes. Most recently Ruggero Raimondi. And Tito Gobbi on CD is entirely unbeatable. Not to mention Samuel Ramey.

Should you take my word on this? Of course not. As regular readers may know I have reservations about Bryn Terfel in this repertoire and I´d strongly advice anyone with an interest in Scarpia and/or Bryn Terfel to check it out for themselves as quite a few will disagree with me.

One truly superb aspect of performance is the Concertgebouw orchestra playing under Riccardo Chailly. Delicate and powerful from start to end.

I have to say I saw Bryn Terfel in Tosca at the Royal Opera in London 18 months ago which was about 8 years after he was in the Amsterdam production. I have never seen a more thrilling production of any kind than that one. The second act was wonderful and I had chills down my spine when he did a bit of stage business prior to the struggle with Tosca and Scarpia's murder. As far as I'm concerned it isn't only Bryn's wonderful voice that has earned him accolades but he's a wonderful actor, admittedly a bit hammy sometimes but with the voice I'll forgive him that.

I really liked this production. Ok Margison is not a sexy painter. But he doesnt sing badly. Ok- and it is the main problem- Malfitano is simply too old and she lacks breath and power. But it works, in a way... In a way only...

Terfel is very good. I saw Ramey last year in Paris and he was the shadow of himself. Of course, if you want to draw comparisons with Gobbi...

I don't understand your accusation of kitchness. Lehnoff couldn't built a new San Andrea, a new Palazzo Farnese and a new castel san angelo. Wallman in Vienna already did it.

He couldn't built a new nothing. Werner Schroeter does just that in Paris since 1994.

Lehnhoff production is nice to the eye, lively, with interesting details and a general concept, the death trap. Maybe the London production is better. But I don't think this one doesn't work.

And technically the DVD is excellent.