Wonderfully dualistic Hänsel and Gretel from Katharina Thalbach in Dresden 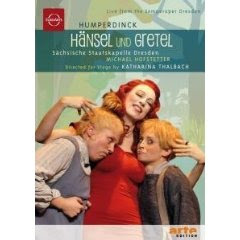 Katharina Thalbach has created an extraordinarily successful production of Hansel und Gretel for the Dresden Semperoper in which she succeeds in capturing the duality of the work as well as the dark eeriness of the Grimm fairy tale.

According to Katharina Thalbach, there is an alternative universe of shadows, which the children have to overcome (to enter the adult world?). Accordingly, to conquer the Witch, Hänsel and Gretel have to dispose of their own shadows (body doubles). This Hänsel und Gretel is a grown-up story about childhood rather than a just a child fairy tale with a dark undercurrent to the grotesquely exaggerated and enlarged symbols presented in this staging. Often the camera flashes to the audience showing glimpses of children in the audience, during the actual performance as well.

The abstract and the realistic, the charicatured and the fantastic. On-screen projections of shadows and silhouetted children figurines as well as glimpses from other Grimm fairy tales such as Little Red Riding Hood pop up in the fairy tale wood together with dream acrobats and fantastical figures. Afte slaying the Witch the children do not join their parents, but slip back into their world of imagination.

The children, of course, do not get this dualism. That is for the accompanying adults, making the performance worthwhile in itself. For the children, there is plenty of straight-forward action to look at.

Furthermore all singers varied from more than fine to excellent, including (for once) a well-sung witch by Iris Vermillion.