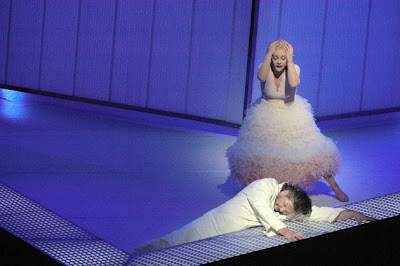 Salome and Jochanaan in the rooftop swimming pool

Peter Mussbach, ex-psychiatrist before he became ex-Intendant of the Berlin State Opera, created a frosty psychoanalytical production of Salome for the Dresden Semperoper in 2005, televised, but not (yet?) released on DVD.

The production quite simply takes place within a roof-top swimmingpool, with a quadrangular cube at the back end of the pool alluding to Herodes house. All this fills up only a small fraction of the stage space, seemingly suspended into air. Everything around this rooftop swimmingpool is dark abyss.

This dysfunctional family is a frosty place to be. Salome is all white, face-paint included and moves around detached from all the others. The colours are centered around the blue-white spectrum with the occasional pink (for love?). Jochanaan is simply a stranger, who does not fit in. No ones head is served on a plate - in the end Salome disappears underneath a carpet with Jochanaan forming an amorphous sculpture with the consistency of stone, which makes the executioner step back in horror.

Evelyn Herlitzius is a fine Salome. She has the voice, she looks the part, and she no doubt acts frosty according to Peter Mussbach´s instructions. Perhaps not always on pitch, her voice seems big enough for the part, though she sounded slightly dry and strained with too much vibrato just below the top. Alan Titus seemed genuinely past his prime as Jochanaan. Dagmar Peckova and Wolfgang Schmidt had little opportunity to make an impact in this depersonalized, frosty milieu.

Does this psychoanalytically-derived swimming pool frostiness make for a compelling Salome? No. But it makes for an interesting one.

Evelyn Herlitzius in the final scene:
The bottom line (scale of 1-5, 3=average):

A very intriguing concept indeed: Alan Titus as Herodiad must be astonishing... ;-))

I saw this production live in Dresden and I found it very convincing. Of course, it is cold and I presume that the coldness of the content plus the coldness of the medium(A television with a screen) is a little bit too much for the TV viewer. Live, it was different. The purity of the lines and the strongness of the staging general shapes gave very powerful aesthetic sensations. Evelyn Herlitzius appeared to me, dramatically, with her youth –don’t tell me she is well above Salome’s age, I know !- and perversity, the Salome of our times. All the opera-goers who had suffered years along with Schmidt’s completely impossible renditions of Heldentenor parts (But I stop there, Beckmesser is shaking his stick of chalk) could rest at last. Wolfgang Schmidt had found a role he could sing and play. The only problem, and it seems TV broadcast couldnt conceal it, was a very disappointing Alan Titus. I can understand that he is a bit of a stranger in this vipers’nest but he seemed absent vocally as well as physically. I saw him two years ago singing Jokanaan in a concert in Paris and his voice was much more powerful... Maybe he had a bad moment during those Dresden sessions.

Its a nice blog posted by you. I was seeking for this type of blog that have a fresh and interesting content. I also have a really nice site where you can find salt chlorinator and pool cleaner for swimming pools within minimum prices. Please have a look on it.