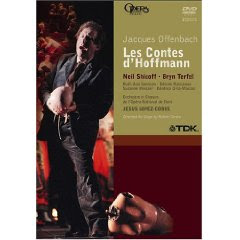 Once again, Robert Carsen has turned out a gleamingly beautiful and stylish production for the Bastille Opera. This time he places Contes d´Hoffmann in a theater during and after a performance of Don Giovanni, where Stella sings Donna Anna. In the prologue we are in the bar, Antonia sits in the artificial orchestra pit while her mother sings from the state., Giulietta is in the audience... Theatre within the theatre at it´s best.

Neil Schicoff is a superb Hoffmann, one of his best parts. The characterization is much more multifacetted than usual, he is not the naive lover, but rather the estranged tired-looking artist, very well suited to his appearance as well as vocal strenghts. Susanne Mentzner is both fine and sensitive as The Muse.

Despite my finding Bryn Terfel´s Villains rather odd as opposed to menacing or dangerous (where is the undercurrent menace of Scintille Diamant?), the Villains are his best parts within in this range of repertoire, of which my reservations on Terfel is too well known to regular readers to be repeated. However, in all fairness: Admirers of Bryn Terfel in parts such as Scarpia and Méphistopheles will admire his Villains unconditionally.

In my humble opinion, there is only one problem with Les Contes D´Hoffmann: The opera is quite simply too long, no matter what version (of the myriad available) is on the table. The problem: The first and last acts are relatively tedious and Offenbach´s inspiration seems to have faltered in long stretches. On the contrary, the stories of the three women (Olympia, Antonia and Giulietta) are superb, most of all the Giulietta act, which also features the Scintille Diamant.

Is this the DVD of Hoffmann to own? Probably yes, at least as long as David McVicar´s 2003 Salzburg production has not been released on DVD.

Hey,
I wanted to get this production, but can't find it online...Where would I be able to get it? I live in New York, but am on vacation right now and wanted to order it online.

This is a UK site. The cover is different but it is the same production:
http://www.prestoclassical.co.uk/w/71278/Jacques-Offenbach-Les-Contes-d'Hoffmann

Is there no other way to get this production that you say is "the best"? Even the Met Opera Shop doesn't have it!

This is another example of the extravagant bootlicking that accompanies most recent reviews of operatic DVDs. Such critics are currying favour or want to seem "with it". The DVD in question here is one of the most revolting desecrations of TALES that can be imagined. Even Terfel can't save it. The phantasy aspects of the opera have permitted various wild productions of HOFFMAN: in an insane asylum, or that present Olympia in a nude body suit humping Hoffman, and on and on. The long list of production horrors from stage directors run wild is too depressing to list here. For the reviewer to claim this is the performance to own in view of present availabilities is a vulgar travesty. Go for the one with Placido Domingo OR with the 1950s version conducted by Beecham with Rounsville as Hoffman and Moira Shearer as the visual (ballet) Olympia -- an absolutely enchanting fantasy of great delicacy and inspired respect for Offenbach's intentions. It's a ballet presentation, with the vocal parts (except for Rounsville) expertly dubbed in. Some features are slightly dated after 60 years, but these are more than compensated for by the lavish magical qualities. Happily, the visual quality and sound quality are excellent. I've seen 7 different DVD presentations of HOFFMAN, and it's become a veritable mine field of vulgar visual and staging horrors that border on the nauseating, even though the vocals are usually competently sung. Guard against praise for "daring" and "imaginative" stagings of this opera, for too often this means that the sluice gates have been opened.