Rusalka in the basement of Fritzl 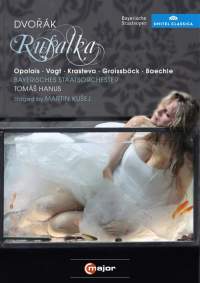 Rusalka. DVD. Bavarian State Opera 2010. Production: Martin Kusej. Conductor: Tomas Hanus. Cast: Kristine Opolais (Rusalka), Klaus Florian Vogt (Prince), Günther Groissböck (Water Goblin), Janina Baechle (Jezibaba), Nadia Krasteva (Foreign Princess).
A both shocking and haunting production, this Rusalka is one of Martin Kusej´s best stagings and probably one that many will find it hard to forget – whether one agrees or not with the “concept”.

Inspired by the horrors of the likes Josef Pritzl and Wolfgang Priklopil, Martin Kusej completely ignores any trace of the romantic era painting a grim and shocking picture of contemporary sexual violence.

While Fritzl/Rusalka´s Father/Water Goblin and his wife/Rusalka´s Mother/Jezibaba live upstairs, Rusalka together with her sisters are kept prisoners in the cellar of an (from the outside) idyllic house. the mother/Fritzl´s accomplice but also she who helps Rusalka escape.

It is simply heartbreaking to see how Rusalka is damaged beyond repair and does not stand a chance adapting to life outside, when she escapes, aided by her mother/Jezibaba. Obviously an insensitive Prince (perfectly played by Klaus Florian Vogt), who carries on a premarital affair with the Foreign Princess does not help her either, however it is clear that the psychological damages inflicted upon Rusalka during her childhood as a prisoner are too severe and incompatible with a normal life on the outside. Finally, Rusalka flees back to the comfort of her prison, the only place she knows and among the most outstanding features of Kusej detailed direction is the ambiguity of the psychological portraits – Rusalka´s ambiguity towards her father and also her mothers/Jezibaba´s ambiguity as both an accomplice and support in Rusalka´s escape.
In the end, however, Fritzl is finally caught by undercover police, but damaged and shattered, the children end up in a mental institution and, by now, Rusalka is clearly insane.  The closest I have ever seen an opera come to a psychological thriller. It may not have been Dvorak´s intention, but it works.

Originally planned for Nina Stemme as Rusalka, Kristine Opolais gave up her Metropolitan Opera debut (Musetta in Boheme) when Stemme pulled out - retrospectively the right choice as she later was hailed as one of the most noteworthy debuts of the 2012-13 Met season as Magda/La Rondine.

Kristine Opolais is the ideal interpreter of this haunted Rusalka, looking and acting the part worthy of a Hollywood-star and with a silvery, agile voice, she certainly is up to the demands of the part. That her voice does not quite appeal to me should not be held against her.
Gunther Groissbock is terrifyingly convincing as Fritzl/Water Goblin in what could easily be one of the most thoroughly unsympathetic character´s ever seen on an opera stage (contrary to Dvorak´s intention). Probably not what he expected signing up for this production....
Not less outstanding are Klaus Florian Vogt´s cool, egocentric Prince, Janina Baechle´s Jezibaba, herself a damaged creature and Nadia Krasteva´s looker of a Foreign Princess.

There is only one let-down here, and for me that is Tomas Hanus in the pit, whose style is rather rigid, reluctant and transparent and does not truly capture Dvorak´s flow.

Almost unwatchable, at the same time one of the strongest stagings I have ever seen.