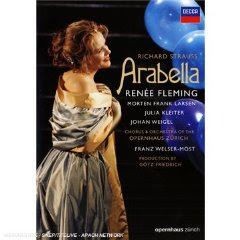 Götz Friedrich´s Arabella production is a bit dusty, but nothing compared to a traditional dust-covered staging and, as all Friedrich´s output, is modern in the outlook. A stylized, minimalistic, however not too interesting production, which will, I suppose, offend very few.

Obviously Renée Fleming is the star of the evening, and those liking the way Renée Fleming sounds on her recent Richard Strauss disc with Christian Thielemann will most likely admire her Arabella, at least from a vocal point of view.
I must admit I am rather un-taken with her Arabella, finding her artificially sophisticated and mannered in both acting and vocal execution. Her Arabella is much more the sophisticated lady than the young girl. Personally I much prefer the Arabella of Karita Mattila or Adrianne Pieczonka, however fans of Renée Fleming´s current sound will not be disappointed.

Young dashing Danish barytone Morten Frank Larsen was a last-minute replacement for Thomas Hampson, which should be enough to cut him some slack. His voice is rather steady and if he manages to expand on his top register and control the incipient wobble he might have a great future. Did I mention, he looks great as well? However, his scheduled Jochanaan and Scarpia later this season, doesn´t strike me as the most ideal path to take from a vocal point of view.

A great future also could be in the making for Julia Kleiter, who more than holds her own next to Renée Fleming. She has a beautiful lyrical soprano and looks convincing in trousers as well as in her short girlish appearance.

My main reservation with this DVD, however, lies with the orchestra. The lush Straussian sound is simply not here. I am not sure Franz Welser-Möst may be entirely blamed for this as his Arabella in Vienna last year was both lush and vivid.