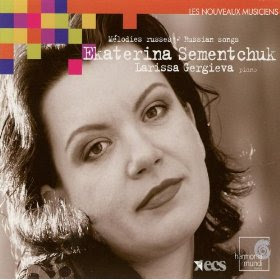 Ekaterina Semenchuk (detailed biography here) was born 1976 in Minsk and discovered by Valery Gergiev´s sister Larissa Gergieva (who also accompanies her on this disc), who subsequently hired her for the Mariinsky Theater, which set off her career.

Based on her voice alone, Ekaterina Semenchuk seems set to have a major career. She has a deep mezzo voice with astonishing strenght and expressivity. Perhaps not with quite the plush beauty of the young Olga Borodina, but then Semenchuk has the character and variation in vocal colours often lacking by the former. Her voice is beautiful, but for Ekaterina Semenchuk it is obviously the drama that counts.

On this debut disc, she is accompanied by Larissa Gergieva and sings a wonderful collection of Russian songs, including several rarities, by Tchaikovsky, Rachmaninov, Taneiev, Glazunov and Gretchaninov. The expressivity and beauty she brings to these songs is simply astonishing. For everyone with an interest in Russian songs, this seems a must-check-out disc.

As I haven´t seen Ekaterina Semenchuk on an opera stage, I obviously cannot comment on whether she may or may not be suitable (looks or otherwise) for a major career in opera. And she seems, as yet, to mainly have performed medium-opportunity roles at the major stages, such as her upcoming Olga at the Met revival of Eugen Onegin. Carmen she has performed several times, and is scheduled to sing it next season in Leipzig. If voice is the only thing that counts, I´d say she will be a major star. If she also is a good stage actress, she will definitely be a major star. Just in case I have assigned her a label on this blog..

On the above disc, her name is spelled Sementchuk, however I´ll stick to the Semenchuk used by her agent and on most of the cast schedules, where she performs.
Posted by mostly opera... at 11:00

Great physical beauty on stage and remarkable dramatic facial and vocal nuances. She performed Berlioz and Ravel's Scherezade with Monterey County Symphony in CA to stupendous audience response in February, 2012.