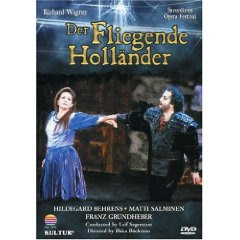 You would most definitely have had to be there to fully benefit from this Flying Dutchman production. From the Savonlinna Opera Festival, this is an outdoor performance staged in the courtyard of the 500-year-old Finnish castle Olavinlinna.

The production is very traditional and the costumes, traditional as well, looks rather stupid. Still-video projections are used liberally, for scene changes as well as for the final scene. As the shooting is done very close-up, it is impossible to get an overall impression of the sets and/or the geography in relation to the audience, which we do not see at any point, omitting the "curtain" calls as well. Furthermore, the usual intensity of a live performances seems to have eluded this production completely.

I am convinced it must have been amazing to be present at one of these performances, however on DVD it is an entirely forgettable event.

Best of the singers, unsurprisingly, is Matti Salminen as Daland. After all, it was his wish to perform at the Savonlinna Opera Festival that kept him away from Bayreuth from the end-80´s and onwards. Franz Grundheber, in his prime, is competent, but no more as the Dutchman, which also goes for Hildegard Behrens as Senta. Those with special affinities for these two performers may rate their achievements in this production significantly higher than I do, though. Which goes for Raimo Sirkiä´s Erik as well. All rather finely accompanied by a quite engaged Leif Segerstam.