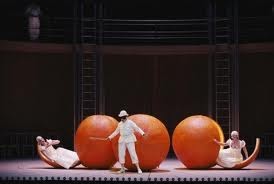 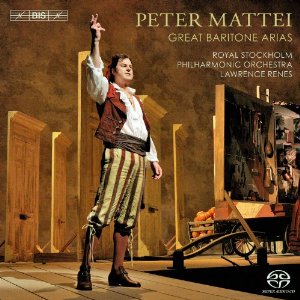 Peter Mattei - Great Baritone Arias. 2011. Lawrence Renes conducts the Royal Stockholm Philharmonic Orchestra.
Peter Mattei (born 1965 in Sweden) has been internationally active for more than a decade, performing at all the major operatic venues in a variety of high-profile roles. Yet, for some reasons he is not (yet) a house-hold name. Perhaps it is a combination of his reluctance to take on too many engagement and too many roles. And then there is the (lacking) recordings as this 2011 solo recital disc is in fact his first.

On stage Peter Mattei´s  main calling cards are Don Giovanni (title role), the Figaro Count and Eugene Onegin and these we do have on DVD, though the Don Giovanni is from 2002 and hopefully the La Scala Opening performance from 2011 with Daniel Barenboim will be released at some point.
There is universally agreement that in his core repertoire, Peter Mattei is among  the very few best in the world, and subsequently he sang title role in the two most prestigious openings of Don Giovanni last year: At the opening evening of the La Scala 2011-12 season with Daniel Barenboim and at the premiere of the new Don Giovanni production at the Metropolitan Opera (though substituting for an ailing Mariusz Kwiecien).

Peter Mattei has a very exceptional voice characterized by a formidable open sound, a strong high register, and a very distinctive middle register with a sound almost bordering on the metallic. Combined with a very straight delivery, for me, at least, his may be the most attractive voice in a repertoire which includes Simon Keenlyside, Dmitri Hvorostovsky and Mariusz Kwiecien among the prominent interpreters.

On this disc we have three excerpts from Don Giovanni including a Deh, vieni probably not to be heard more beautiful. Another of his calling cards, the Count in Figaro is represented with "hai gia vinto la cause" as well as Figaro´s "Se vuol ballare" sung with the elegant voice underlining why his calling card i the Count and not Figaro. The elegance continues in the two arias from Eugene Onegin.
I have heard Peter Mattei´s Posa (Don Carlo) live, a role he should sing more often, here represented with "O Carlo ascolta".  The same goes for Valentin in Faust, where it is clear he would be among the top performers of the role, did he just opt to sing it.

Peter Mattei has been wary moving into the heavier repertoire, cancelling a Macbeth in Stockholm a couple of seasons ago. Next season he is scheduled as Amfortas in the Metropolitan Opera new production of Parsifal (not represented here) however we have the more lyric part of Wolfram in Tannhäuser, here with two excerpts including the famous Song to the Evenstar , I don´t recall him having performed on stage, but his delivery is very beautiful.

A recital disc like this can hardly avoid a certain sameness to creep in at point. However, in Peter Mattei´s case it is a very beautiful and elegant sameness and this disc presents him at his best. Now, would he only perform a bit more on the international stages.. 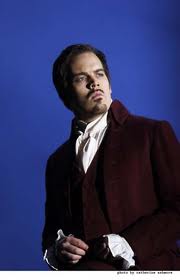 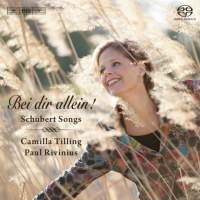 Rarely do you her a song recital, which blows you away the way this new disc with Schubert songs from Swedish soprano Camilla Tilling does.
Born in 1971, Camilla Tilling is mostly known on the opera stage for her interpretation of parts such as Sophie (Rosenkavalier) and Pamina and I remember hearing her as a vivid Oscar a couple of years ago in Paris.
Her  new Schubert recital disc "Bei dir allein!" is simply one of the best lied recital disc I have heard in a long time. Engaged and fresh-voiced, Camilla Tilling creates myriads of moods and she has that rare ability to turn on and completely off her vibrato with many degrees in between, as well as a varied attack even at the highest notes, as also Irmgard Seefried had. This extraordinary disc is in that league.
Previously, Camilla Tilling she released a disc with Richard Strauss lieder, where she demonstrated many of the same qualities, though to lesser effects as many of the Richard Strauss lieder for her voice type benefit from a more soaring voice than Camilla Tillings.

This Schubert disc, however, presents the finest lieder singing to be heard and is a clear must-have.

From an artistically point of view I simply do not see the rationale behind the release of this new solo album by Erwin Schrott. From a pure commercial point of view, however, it could make sense:

In 2008, under his contract with Decca, Erwin Schrott released his first solo CD, an album not unlike the current one, with a selection of bass-barytone arias. The album was received with mixed reviews and subsequently  Erwin Schrott has signed with Sony. Yes, there are differences between the two albums of course, but mostly in favour of the first album, where Erwin Schrott included some of Mozart roles such as Figaro and Leporello, which he has successfully performed on stage. On this new album, the arias are different, but with an overweight into repertoire, which simply does not find Erwin Schrott at his best and exposes his vocal weaknesses: Méphistopheles Veau d´Or (Faust), Scintille Diamant (Hoffmann), Tre sbirri (Scarpia in Tosca), three pieces from Mefistofele (Boito)..

A sticker on the disc states that this album presents Erwin Schrott in his signature roles. This is simply not true. He may have performed the Faust-Mephistopheles and Escamillo a few times on stage, but his calling cards are still Mozart roles such as Leporello, Don Giovanni, Figaro. Not represented at all on this current CD. And this, I don´t think will change. Schrott simply does not have the vocal qualities to distinguish himself in the basso cantante repertoire: He is practically unable to hold a vocal line, his intonation is shaky with major weaknesses in both upper and lower registers. Furthermore, I don´t reallly hear anything interpretatively.

We have a number of unrecorded bass-barytones active today, who would have done a better job than Schrott in the recording studios. And he is simply no match for those already recorded in the same repertoire (from present day: René Pape and Bryn Terfel, from the past: Samuel Ramey, George London).

On stage, however, in his core repertoire, Erwin Schrott is among the best there is today, not least due to his excellent combination of stage presence and physical acting.

So why release an album so similar to his previous one? Has his public profile been raised sufficiently with his big venue concerts with Anna Netrebko to make this album a commercial success? Honestly, I don´t think so.
Le veau d´or - from a Barcelona concert in 2011: 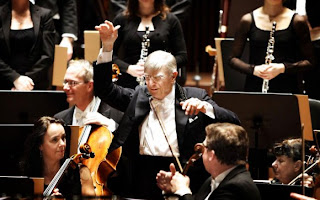 84-year old Herbert Blomstedt was chief conductor of the Danish National Symphony Orchestra between 1967-77 and his continued annual visits are always major events, as he is immensely popular with the orchestra. Often, as today, this popularity translates into great playing and this was simply a wonderful afternoon in a sold-out DR Concert Hall.

Blomstedt´s Brahms is dense as well as straightforward, conducte, of course, without the score as this is his core repertoire. The climaxes with the choir was simply magnificant, and I don´t remember when I have heard a better, or even a performance of the same level, from the orchestra.

Peter Mattei has a wonderful straight deliveryt, while Camilla Tilling never quite got to glow.

When Blomsted took over the orchestra it was semi-professional (if not necessarily on paper, then in sound) and he, if any, initiated the development into an orchestra performing on the international level we saw today. Ironically, the new chief conductor of the orchestra Rafael Frühbeck De Burgos is the same age as Blomstedt, his age being a major point of criticism in Danish media. Though somehow I doubt we´d heard the same complaints had Pierre Boulez been hired?