A better casting for the male leads of Don Giovanni is hard to imagine. Unfortunately the ladies did not quite live up to their male counterparts. According to himself, this was Bryn Terfel´s last performance of Don Giovanni as the Don. 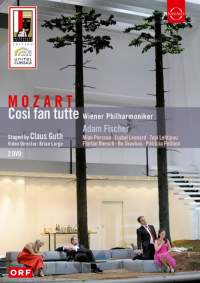 Those familiar with Claus Guth´s previous work such as the psychoanalytic Nozze di Figaro, the Don Giovanni set amongst junkies in a wood in the middle of the night, the Ariadne who commits suicide on Naxos, Richard Wagners Tristan in love with Mathilde Wesendonck and a Walküre set in a miniature dolls house will know better than to expect a bubbly Mozartian comedy.

We are at the end of a party at the girls rather fancy loft apartment - all in white with the occasional African mask. Bo Skovhus´ menacing Don Alfonso sets the tone immediately: This is not comedy, but rather Claus Guth shows us the personal consequences of the partner swapping resulting in four disoriented people at the end and as the action gets darker a certain recycling of the 2008 Don Giovanni forest, which progressively enter the house.

Essential to the success of this production, singer-actors are cast in all parts, with not even one weak link. The girls take centre stage and both girls look and act fabulously with a genuine interaction not always seen. The velvety sound of Isabel Leonard mixes well with Miah Perssons elegant soprano. The boys are more anonymous, but still competent. Bo Skovhus neurotic style and commanding presence is just right for Don Alfonso combined with Patricia Petibon´s in every way excellent Despina completes an outstanding cast.

Adam Fischer conducts the Vienna Philharmonics and as always we are far from the period-inspired performances some (not me though) may prefer.