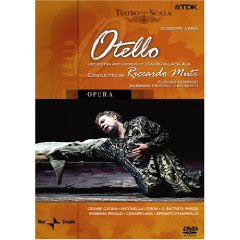 Graham Vicks Otello opened the 2001 La Scala season and was at the same time Plácido Domingos farewell to a role, he had dominated for more than 30 years.

Plácido Domingo is 60 years here, and in pure vocal terms he was in stronger voice on his earlier Otello DVDs from Covent Garden 1992 and Metropolitan Opera 1995. However, this seems a minor concern, when he presents with such a truly majestic Otello as seen here. Psychologically, his portrayal of the ultimately insecure stranger made leader, has never been better.

Graham Vick provides a very spartan single set inside an ornamentated marble semicircle. Beautiful period costumes are applied. The focus, clearly is on the psychological drama. We clearly see, how Otello, despite his advanced age is genuinely insecure compared to his very young wife. Leo Nucci´s Iago works rather by scheming friendliness, as his appearance is rather un-menacing.

Riccardo Muti provides powerful conducting. I know from personal experience how his Otello may blow you away in the theater, however I feel he fails to extract the subtleties from the scores. That this may be done without losing any power, Solti is only one example of.

All in all, this Otello ties closely with the Metropolitan production as a recommendation as the best Otello on DVD.