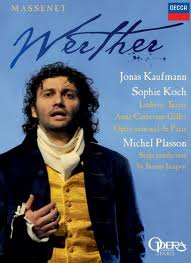 This is one of  the very few opera DVDs where you have to search in your bag of superlatives and just use them up. Moving, transporting, stunning..name it. One of the best opera DVDs ever released. I cannot recommend it enough. I remember the reports from Paris in 2010 speaking of electrified audiences and sold-out performances.
Jonas Kaufmann, (in his role debut) is simply smashing as Werther, vocally as well as dramatically, a role he was born to sing, with his classical look of the romantic hero.
Equally so is for Sophie Koch as Charlotte, entirely believable and immensely touching. The scenes between Werther and Sophie are simply heart-breaking effectively contrasted to Ludovic Téziers unusually menacing Albert.
Benoit Jacquot´s staging of Werther for the Bastille Opera is not exceptional per se, naturalistic and with a gloomy Hammershoi-inspired look. He simply tells the story, which, with these protagonists is more than enough and testifies that traditional productions do not necessarily equal boredom, even for Regietheater enthusiasts. Few will see this DVD and remain unmoved.