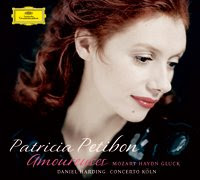 37-year old French soprano Patricia Petibon has teamed up with the period ensemble Concerto Köln and conductor Daniel Harding for this, her first, solo disc for Deutsche Grammophon. A website dedicated to the disc may be accessed here.

According to the promotional material, Patricia Petibon "circles around the ever-important topic of love and desire – in a series of character-portraits she explores how the very different female characters in the operas of Mozart, Haydn, and Gluck respond to the challenges of love".

First of all, Patricia Petibon is an enormously compelling vocal performer, who clearly gives 110%, which makes this album fascinating to listen to.

On pure vocal terms, I am a bit more sceptical, though. Compared to her last solo disc (Patricia Petibon - French Touch from 2004) her voice seems to have become rather thin at the top as well as having lost some of the lyric glow.
Furthermore, she is clearly strained in the more dramatic and expressive pieces, which nevertheless are the best on the disc, such as Tiger (Zaide), Odio (Haydn´s Armida) and Vanne d´Affretta (Lucio Silla) while I find the Queen of the Night (Die hölle rache) too heavy for her.

Barbarina´s L´ho perduta is really quite touching and seems to suit her slim voice better than Susanna´s Deh vieni. Another highlight is Venez, secondez mes désirs from Gluck´s Armide.

However, what remains upon repeated listening is that Patricia Petibon is a very unique performer, who infuses this disc with an elusive individuality so rare among contemporary singers making for irresistible listening. Though I´d be worried about the length of her career if she continues to sing like this as it simply doesn´t sound healthy. However, it makes for tremendously compelling listening.

Not to forget Daniel Harding´s simply superb, full-blooded accompaniement with the Concerto Köln, greatly contributing to the success of this disc.

I have no inside information about this, but to me it is clear that she coaches with Natalie Dessay's teacher, as she is starting to develop the same flaws...
Very striking in the very first moments of the above video (when she is first on screen).

I didn´t know she coached with Dessay´s teacher, but I did think exactly the same thing as you upon listening to her.

Here is an English rendition of aurele's message:

I have this CD at home and I like very much Petitbon in it. Her voice is getting wider, and she adds a lot of dramatic intentions.
Harding on the other hand is horribly dull.

The CD is disaster. First off, her vibrato. Awful at times! Secondly, she's at times a quarter of a tone off! I am willing to show this on computer to whomever challenges me! She's singing a totally forced, unsuitable, if original program which would be better suited to people like Damrau!

While I only say this sparingly about singers, here it is: if she continues to delude herself, she's gonna lose her voice. The vibrato is only bound to become worse. That she is also imitating people like Damrau is also evident in the unfortunate video of her recording of the Greek of the night. Imitating peoples' mannerisms and adopting the wrong program from them does not the good singer make.

Bottom-line: did they even LISTEN to the damn thing before releasing it?

Now, now! Where in a world do you hear her vibrato in this CD???

Some people have nothing else to propose apart from being rude and plain mean!

This CD is great and I pretty much agree with "Mostly"!

Beckmesser, if she has the same coach as Dessay did in her prime, that can only be to her advantage. Dessay in her good years was fabulous in this repertoire (those days are long gone though).

Finally, as far as "The Queen of the Night" is concerned, I find it very courageous and liked it a lot. It's now the right time to record it. She's got the strength and the ability to sing it - do it now! You go girl! And yes, her Queen doesn't equal Damrau's but sounds a whole lot better than Erika Miklosa on the CD "Das Mozart Album" with Netrebko, Garanca, Pape and Terfel - methinks.