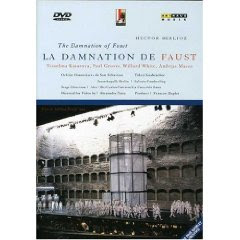 When this staging of Berlioz´ Damnation de Faust by the Catalán theater troupe Fura del Baus opened at the 1999 Salzburg Festival it was rapturously received by press and audiences alike.

And indeed Fura del Baus has created a staggeringly spectacular and grandiose production, in in one of the best operatic stagings I have encountered.

A gigantic transparent cylinder is placed center stage in and around which most of the action takes place. The cylinder is a melting furnace. From the accompanying booklet we learn that Faust, like everyone else, daily empties his psychic substance (the milk cylinder on his back) in the cylinder, advancing to a suicide attempt when he, during a total eclipse throws himself into it. Through a connecting tube of the cylinder the re-forged Faust meets his shadow, Méphistopheles. Méphistopheles and Faust are unseparable, like night and day, confusing Faust´s real and fragile soul (Marguerite). As she is Faust´s soul, Faust is forced to make a pact with Méphistophéles to rescue her, when she flees from the unlikely pair. Méphistophéles and Faust then plunge into the melting furnace - Faust accepts his shadow side - Méphistophéles has won.

State of the art cybertechniques are used to astonishing effects. The backdrop consists the intrinsic arches of the Felsenreitschule, extraordinarily successfully integrated into the stage. Shatteringly beautiful and powerfully symbolic.

Sylvain Cambreling has received much praise for his conducting. Slightly surprising to me, as I find he lacks the powerful and dense reading capable of revealing the full depth of the score.

Willard White is a superb Méphistophéles - if only it had been an acting role. As one of less than a handful of singers around, he has the necessary Méphistophélean authority. Vocally, however, he unfortunately competes with the greatest basso cantantes in history, and while he does the declamatory parts well, I miss the beautiful voice in parade arias such as the Serenade ("Maintenant chantons..) and the Aria ("Voici des Roses").

Paul Groves is a lyrical Faust, appropriately overpowered by Willard White, especially dramatically. Vesselina Kasarova has a sort of androgyne air to her appearance, which makes her particularly intriguing as the black Marguerite, Faust´s soul.

In my opinion, it is simply not possible to mount a better staged production of Damnation de Faust. If only this production could be copied and pasted into Gounod´s Faust it would be absolutely revelatory.

« Vocally, however, he unfortunately competes with the greatest basso cantantes in history… »

That is the understatement of the year…

I thought that this year's production at the Met by Robert Lepage was truly amazing and I can think of no better way to stage it. I have to watch this one...