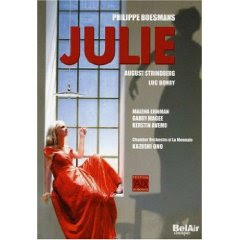 The libretto (Luc Bondy/Marie-Louise Bischofberger) follows Strindberg rather closely: It is the story of the pathetic-ambitious-emotionally distanced servant Jean trying to climb up the ladder to high society by having an affair with his mistress Julie, thereby betraying his fiancé Kristin. While Jean is motivated by ambition, Julie´s motivation sems to be desperation. And/or boredom. In any case, neither are motivated by genuine attraction or love. In the end, however, Julie feels disgraced and kills herself with a knife, on Jean´s suggestion.

Philippe Boesmans´ score is minimalistic and transparent. He aims to "reconnect music to emotions through narrative". The running time is 75 minutes since our ears keep seeking "harmonies which nevertheless disappeared some 70 years ago." (Bondy).

The composer on the work: "For me, what is most important is the narration and its understandability. That's why Julie and Jean—a mezzo soprano and baritone, respectively—have tessituras close to the spoken voice. So that everything is understood, I favored writing in the voices' middle register, reserving the high range for repeated phrases. As for the orchestra, it's more like a group of chamber soloists, where each player has a specific role. Some synthetic sounds come from the middle of the group, but there is nothing electronic."

Swedish mezzo-soprano Malena Ernman also created the title role at the 2005 Monnaie world premiere and seems to inhabit the role completely: She is an extraordinary actress, is vocally superb and looks great. She is partnered by the equally effective Garry Magee and high soprano Kerstin Avemo as the betrayed Kristin. The lyric mezzo-soprano of Miss Julie is effectively contrasted with Kristin´s higher lying coloratura soprano.

Ultimately, however I find the entire thing distancing and unmoving, mostly to be blamed on the score, since the works seems to have gotten a first-rate performance: Perhaps less transparency, more layers are needed. Eerieness and drama are lacking. When Julie slits her throat at the end of the opera it simply seems rather strange and detached, as opposed to the moving effect the composer most likely tried to achieve.