The Art of Singing: Golden voices of the century 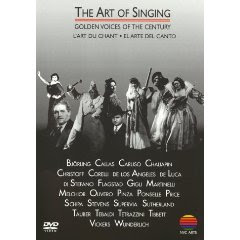 DVD: The art of singing - golden voices of the century. Further information here

This DVD presents film clips of several of the greatest singers of the century. Only filmed performances were included, which obviously limits the choice of excerpts.

As an example, the (allegedly) only filmed clip available of Luisa Tetrazzini shows her singing to a Caruso record around the time of her retirement. Lauritz Melchior sings Winterstürme to an odd accompaniement of mixed piano and orchestra behind the piano in a living room. Jon Vicker´s Florestan is scarily intense. Rosa Ponselle is represented by excerpts from Carmen and an impressive Risë Stevens is seen in Samson et Dalila. Kirsten Flagstad´s Hojotoho is heard in staged matinée excerpt of Walküre. And it all starts with (who else?) Enrico Caruso with Vesti la giubba.

Not to forget Ezio Pinza (by the way the greatest Don Giovanni and Méphisopheles of the century) is curiously represented with a Boris Godunov excerpt taken from a 1953 film, where Ezio Pinza plays the bass Chaliapin. Thankfully there is no South Pacific...

On a whole, I must admit to being quite satisfied with operatic life in the present time, not at least dramatically, however some of those voices were truly magnificent..

Is this the collection that has a large excerpt from Cavalleria Rusticana with Beniamino Gigli? If so, watch the Alfio (he was an uncelebrated but capable baritone whose name escapes me at the moment) react with studied indifference to Turridu's pleadings: striking a match(twice ! on the seat of his trousers) to light his cigar, then extinguishing it by cutting off the end with a huge blade. It's a moment to treasure.

I don´t seem to remeber a large Cav excerpt by Gigli, but wouldn´t rule it out as I don´t have the DVD next to me for the moment.