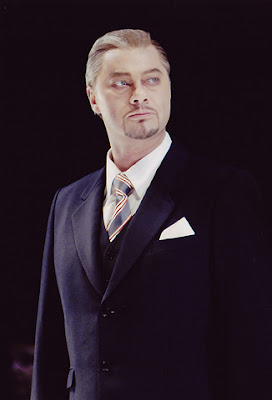 Generally acknowledged as the leading operatic bass of today.

René Pape´s first breakthrough came at the 1991 Salzburg Festival as Sarastro at the invitation of Sir Georg Solti, who championed him until his death in 1998. In the mid-to late 90´s however, René Pape´s career seemed to have reached a plateau, but as King Marke at the Metropolitan Opera in 1999, René Pape reemerged with previously unseen emotional depth as well as vocal beauty. Since then he has appeared on all major stages (detailed description in his DG biography) such as Metropolitan Opera (more than 150 performances see below), La Scala (Rocco, Rheingold-Wotan), Covent Garden (Heinrich, Mephistopheles), Vienna State Opera (Hunding, Filippo), Paris Bastille Opera (Marke), Bavarian State Opera (Marke, Rocco, Filippo), Lyric Opera Chicago (Pogner, Mephistopheles) and San Francisco Opera (Pogner).

René Pape has remained a company member of the Berlin State Opera, giving ~20 performances a year and is a close collaborator of Daniel Barenboim, whom he considers it "an honour" to work with.

His second artistic home is the Metropolitan Opera, where he has appeared more than 150 times every season (except one) since his 1995 debut as Speaker in the Magic Flute, a favorite of critics and audiences alike in parts such as King Henrich, Rocco, King Marke, Filippo II, Leporello, Méphistophéles (Faust), Gurnemanz, Pogner, Banquo, Escamillo, Boris Godunov, Sarastro and Orestes.

At the Bayreuth Festival he played Fasolt 1994-97 in the Kirchner Ring.

René Pape´s voice is one of the most beautiful of the century and may best be described as a high bass with top notes. The extreme flexibility in his voice, as well as the fearless topnotes allows him to take on roles in the bass-barytone range, such as Don Giovanni, Orestes, Escamillo and Wotan.

René Pape is not a traditional German bass in the tradition of Gottlob Frick, nor is he a true basso cantate in the line of Ezio Pinza and Samuel Ramey (though he tends to state so himself) as his voice is more poignant than the latter two. Neither is he a bass-barytone, though his vocal range is rather similar to that of illustrious bass-barytones of the past (Hans Hotter etc.), however with a deeper center voice. Futhermore, René Pape has perfect, crystal-clear German diction. These issues, as well as his artistic versatility refusing to walk the easy path and concentrate on the works of Richard Wagner, ofte makes it difficult for critics to decide exactly whom of the past he should be compared to.

On stage, René Pape is a commanding, but often lofty presence. Almost invariably in control, taking calculated interpretatory risks (Boris Godunov perhaps excepted). If he manages to take greater interpretatory risks and show more individuality, he will be one of the truly major singers of the century. Personally, I consider him the best operatic singer of today as he appears now. All included.

René Pape has signed an exclusive contract with Deutsche Grammphon, of which his first solo-CD "Gods, Kings and Demons" was released 2008 and his second "Wagner Arias" in 2010. He appears as Wotan in the Valery Gergiev conducted Ring on CD, of which Walküre was released February 2013.

"When I went to the high-school music conservatory they said, "You have an OK voice, but the highest level you will get to will be a member in a professional chorus". I thought, fine. I had always been in a chorus. I knew nothing else."

"Just out of school, I didn't even know what a free career was. The thing didn't exist. There were 56 theaters in Germany. You sang for a national jury, and there was a rating system. Every young singer got a job, whether in a radio chorus or as a soloist somewhere."
"Solti was the first and the most important influence for me and I am not even sure I can explain all the ways he helped me. I never had a chance to meet Bernstein, I never met Karajan; but I had Solti. His last seven years were really my first. He was like a grandfather to me. He trusted me."
"I prefer the Italianate sound, even in Wagner. You don't have to shout fortissimo all the time, you can really maintain a beautiful line. And remember that Wagner wrote for singers who could sing all these lines, singers trained in bel canto who sang Italian opera all the time. I like that."
"Yes, I smoke. And I am not planning to quit".

Gurnemanz - role debut at the MET 2003 (Schenk/Gergiev), furthermore at the Berlin State Opera (from 2005, Eichinger/Barenboim), Met 2013 (also on HD). What applies to his King Marke, also applies to his Gurnemanz.

Sarastro - countless performances, most notably at the Salzburg Festival (including the 2006 Audi/Muti DVD) and the Metropolitan Opera (English version available on DVD).

Don Giovanni - as both Don Giovanni (in Berlin) and Leporello (Berlin, the MET and Verbier 2009).

Pogner - countless performances, including the MET (on DVD).

Rocco - countless performances, most notable on DVD from the 2002 Flimm production from the MET.

Other Wagnerian parts include: King Heinrich (Lohengrin, latest heard at the La Scala 2012 season opening), Landgraf (Tannhäuser), Fasolt and Hunding (Ring des Nibelungen). He may slowly be retiring these medium opportunity parts as he begins to take on the major Wagnerian bass-barytone parts (see below). Non-Wagnerian parts include Banquo (Macbeth), Gremin (Eugene Onegin) and Orestes (Elektra).

René Pape is currently contracted at the MET until at least 2016, where future parts may include  Filippo (Don Carlos) and possibly Khovanschshina (Dosifey).
He will sing Filippo (Don Carlo) fall 2013 at La Scala and Oreste (Elektra) in Dresden in 2014.

Always very careful, he cancelled the scheduled Hans Sachs in Berlin 2007, a part he will now postpone until after Wotan. His Wotan debut (Rheingold) took place  in 2010 with Daniel Barenboim at La Scala. He will sing Wotan in the new Barenboim-Cassiers Ring in 2013.

The foreseeable future seems also to include Khovanshchina.

What the future will not include: Ochs in Rosenkavalier (source: himself).

Heard him as Banquo at the Met earlier this year, just absolutely amazing. He got the biggest ovation of the night, as he always does in New York.

According to the Associated Press he also got the biggest ovation of the night at Barenboim's Tristan und Isolde Met debut.

Far and away the biggest ovation of the night (Barenboim was also warmly acclaimed).

Really disturbing was the margin by which he was the best singer on stage. Salminen held the same status last year even with Voigt and Heppner in the title roles but here the disparity was...well there's really not appropriate euphemism so we'll leave it there.

Rather problmatic though when this is the case with Mark in Tristan. Don Carlo, Boris, Walkure, great. When its Leporello, perfectly fine.
But...

Your cover has been blown Mostly: You are Rene Pape's mum! Nicht wahr?

Pape is the best bass nowadays. He is absolutely amazing as a singer and also has a wonderful personality. All the best to you,Rene! ;)