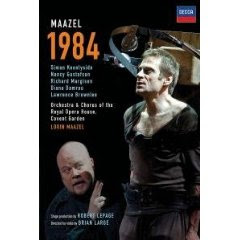 Originally Lorin Maazel´s opera 1984 (based on Orwell´s novel) was commissioned for the Bavarian State Opera by August Everding. However after Everding´s death, the future of the project seemed insecure and after plenty of negotiations, including subsidising the production with 400.000 £ of Maazel´s own money, his opera received it´s world premiere in 2006 at Covent Garden in this production by Robert LePage. The production played for a full house and was accompanied by virtually uniformly negative reviews by the prominent British critics, a seletion of which may be found here.
The opera has been mounted at La Scala, Milan as well as released on DVD ealier this year and a website for the piece has been created.

My main problem with the work is quite simply the quality of Lorin Maazel´s composition: I find it mostly hollow and superficial. Though I lay no claim to expert status on modern compositions, the difference in quality compared with a work such as Adams´ Dr Atomic, which uses many of the same composition techniques as I hear it, is obvious. Maazel simply never succeeds in penetrating the surface and many of the scenes, especially when involving the chorus, came off too stiff. That said, I still find the above-mentioned criticism a bit harsh - the work certainly did have some good points to it, especially Winston´s torture scene came off very convincing and there generally was a good sense of flow to the entire opera. Not to mention, I certainly prefer straight-forward action like this in an opera as opposed to pseudo-intellectual musings on abstract subjects.

The plot, so to say, follows Orwell´s novel rather closely (at least as I remember it) and Robert LePage make plenty of use of (relevant) video projections alluding to the Big Brother is watching You theme of the work. Otherwise, I wouldn´t count this among LePage´s finest work, as the setting in general seemed rather ordinary, compared to other LePage stagings such as Rake´s Progress.

Best of all was Simon Keenlyside in probably the best performance I have seen him in: In splendid voice accompanied by extremely convincing acting, he perfectly embodied the character of Winston. Nancy Gustafson was given considerably less to work with dramatically, but did what she did fine as did Richard Margison´s bad guy.

And Lorin Maazel, the conductor: Difficult to judge if the music would have sounded equally shallow in other hands, but my guess would be yes.