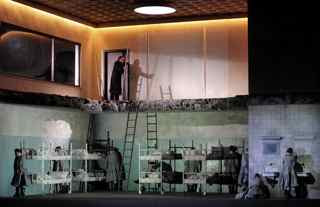 Young German director Claus Guth has polarized audiences like few others, with previous works such as the Salzburg stagings of Nozze di Figaro and Don Giovanni as well as his Zurich Ariadne auf Naxos. Now he is in charge of the 2008-10 Nibelungen Ring at the Hamburgische Staatsoper conducted by Simone Young, of which this Walküre is the second installment after last season´s Rheingold.
Claus Guth´s concept as it appears in this Walküre is not new, but it is executed with more consequence and clarity than I have seen before. Claus Guth certainly is no man of the middle-road, which his previous work testifies to as well. Die Walküre is simply Wotan´s marionette theater, in which he orchestrates and controls every single movement.

Act one opens during the prelude to a reclining white platform with a red button on the side on which the white-clad Siegmund and Sieglinde stand in frozen positions until “activated” by Wotan. As we learn in Act two (se photographs below), this is in fact a miniature world, an electric marionette theater placed on Wotan´s table in “real life”. The spotlight blinding Siegmund and Sieglinde during “Winterstürme” is placed in Wotan´s "real life" living room and Wotan conveniently appears mid-Act 1 to place the sword in the entrance/exit miniature door. That Wotan in the “real world” takes the miniature Hunding and places him on the real floor (from where Fricka subsequently picks him up) is part of the marionette game as everything else.
The side wall of Wotan´s room is decorated with a disc of the world surface. On the floor we see a two-storey doll-house with Wotan´s marionette Valkyries, the miniature world we are to step into in Act 3 as it turns out.
When Brünnhilde announces Siegmund´s death we are once again in the miniature world, now underneath the electric marionette game. And in Act three we have moved into Wotan´s miniature doll-house of Act two – the floor between the basement and first floor has been blown away and the Valkyries are now trapped in the basement, trying in vain to move to the upper level. In the end, this basement is where Brünnhilde is put to sleep.

There is much to admire in Claus Guth´s staging and the concept resonates well with many aspects of the work. However, I suspect Die Walküre will ultimately turn out the weakest installment of his Ring, for the simple reason, that it is the singular part of the tetralogy least suited to abstract ideas. Essentially a chamber drama, to lift it off, interpersonal drama is needed.
And this we do not get here, whether entirely attributable to Guth is difficult to say. However, to have Siegmund and Sieglinde as well as Wotan and Brünnhilde virtually non-interact/interact with stylized gestures clearly carries Claus Guth´s trademark. However, if he succeeds in creating a convincing beginning in Rheingold as well as tying the ends together in Götterdämmerung, this may be a small price to pay.

Together with David McVicar´s Strasbourg production and Fura del Baus´ Valencia showing, this looks like the outlines of one of the most interesting Rings on the circuit.

Vocally, the absolute highlight of the evening was Yvonne Naef´s wonderfully dark and very moving Sieglinde. Even the third act “O hehrste wonne” she navigated rather well, though obviously the price to pay for a mezzo-soprano Sieglinde is the power in the high register.

Falk Struckmann is what I would call Regie-resistent if I was writing in German (though perhaps strictly speaking not a correct German word, I trust most will get my point): He simply always plays himself. Last month it was Pizarro, before that Duke Bluebeard. A previous Bayreuth Wotan (also on DVD from Barcelona) and a mainstay of countless Barenboim Wagner productions at the Berlin State Opera in the past 15 years, his Wotan is a known entity. Though closer to a character baritone these days, he was in better voice than I have him in for a long time – especially the depths of the monologue he navigated rather well with a surprisingly smooth legato, however he almost retorts to yelling out the topnotes and generally sings in a way which does not sound healthy. He does, however, generates a fair amount of authority, but only when he moves around... However, this is not news. Interpretatively, though, the water is rather shallow: Falk Struckmann´s Wotan is no different a character than his Iago, Amfortas, Kurwenal etc: A semi-detached person who glides on the surface – not entirely unsuitable for Guth´s concept, I suppose..

An equally known entity from Berlin and Bayreuth is Deborah Polaski´s Brünnhilde, also she past her prime, but nevertheless remaining one of the finest Brünnhilde´s around, with an impressive middle to lower register. Futhermore she is on pitch with a tolerable vibrato. That her acting skills are less than engaging is not news to those familiar with her, however she is no worse than most and looks the part reasonably, even at 59.

Less understandable is the casting of Jeanne Piland as Fricka in a part at least 30 mezzo-sopranos on the circuit (as well as several company members) could have done better-to-vastly-better. And if Claus Guth intended Hunding to be menacing (perhaps he didn´t), young second-rate-mobster-looking Mikhail Petrenko is simply not the man, despite fine singing. Stuart Skelton´s Siegmund most of all looks like a passive hip-hopper – loose clothing, almost no presence on stage and a voice in the lighter end of the spectrum, though not at all uneffective.

Also Simone Young previously conducted the Barenboim Ring (in his absence, obviously) at the Berlin State Opera, and interpretatively I find much to like: She is wonderfully dynamic and rather brisk in a reading emphasizing the lower strings and with plenty of rubato to a degree that occasionally the inner-flow seems missing. But in summary she conducts a Walküre with much glow and she is never boring. She states her major influences to be Barenboim and Furtwängler. I hear a lot of both in her interpretation, but she certainly has her own ideas as well.

All in all, a very promising Hamburg Ring.
Walküre Act 1 set - with Wotan controlling the characters from outside the miniature: 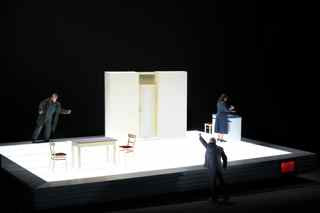 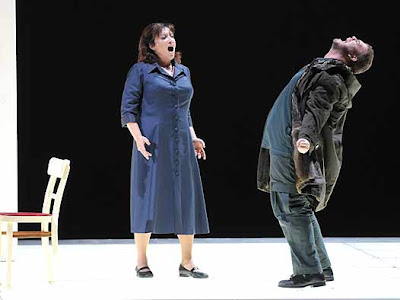 In act 2 we realize that the entire Act 1 was a marionette miniature controlled by Wotan: 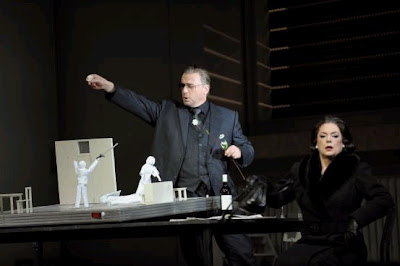 Wotan´s living room - the Act 1 miniature still on the table, the Valkyrie doll house to the left beneath the earth disc: 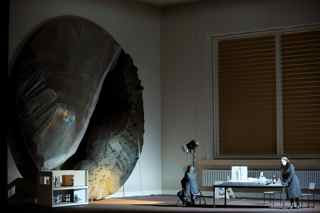 We are back in the miniature world, beneath the Act 1 marionette. Brünnhilde foretells Siegmunds death: 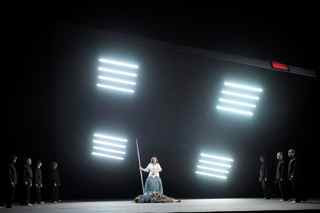 Act 3: Inside the basement of the Valkyrie doll-house miniature: 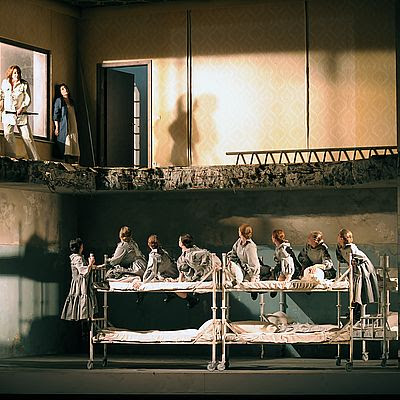 Wotan climbing down into the basement of his Valkyrie doll-house miniature in Act 3: 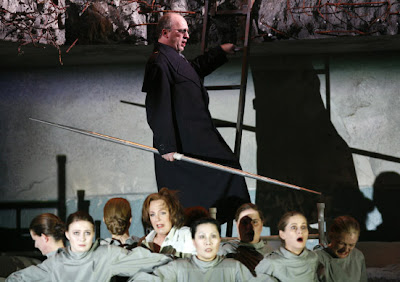 And Polaski?? No mark for her??

Sorry..looked at the list before I posted and thought it looked short, but couldn´t figure out who I was missing :)

Only just seen this posting - I always wondered what happened to Polaski - mystery solved !

Only saw a couple of times about 15 years ago as Brunhilde. She was ok - I seem to remember she didn't get good reviews and was replaced by Anne Evans - who imho was in a far better league

Really interested in your high marks for Naef. She's just completed a Ring where she was by far the most consistent of any singer who appeared in 3 of the operas (the honors, naturally, go to Pape for his 2 shows) and absolutely sensational in spots (Morris was somewhat better at his best but had some spotty moments). She's a known quantity but I was surprised that there were some murmorings of criticism. In the theater she was greeted with well deserved ovations, particularly for her Waltrute last night.

It would be interesting to hear her as Sieglinde although I doubt she would have surpassed Pieczonka.

No, I don´t think she surpasses Adrianne Pieczonka (whom I´ve heard as Sieglinde in Bayreuth). Or Eva-Maria Westbroek or Waltraud Meier. But she has a rather wonderful dark and warm voice and was a fine Kundry as well in Zurich last year.