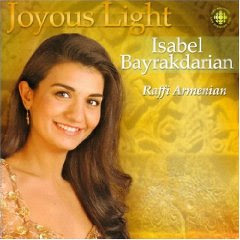 Canadian soprano with Armenian roots, Isabel Bayrakdarian sings 18 Armenian lithurgical songs on this, her first solo album from 2002 ,entitled "Joyous light". Potential listeners should not be deterred by the cover, which admittedly is not well chosen to convey the very deepfelt and genuine impression of this album.

It is simply an extremely beautiful collection of music, with which Isabel Bayrakdarian quite obviously has been familiar from childhood and which suits her voice beautifully, appearing entirely unstrained. She is accompanied by Elmer Iseler Singers and Chamber orchestra conducted by Raffi Armenian, but sings some a cappella tracks as well.

The recording of this disc was inspired by the commemoration of 1700 years of Christianity in Armenia in 2001. Highly recommended for those interested in exploring this type of music.
Posted by mostly opera... at 08:00