Long overdue: Daniel Barenboim debuts at the MET with a superb Tristan and Isolde 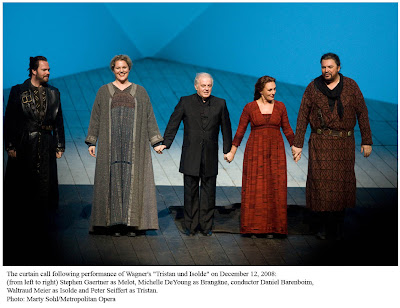 On Friday, November 28th Daniel Barenboim made his about 30 year overdue debut at the Metropolitan Opera conducting Tristan and Isolde.

Doing this, he was the first conductor, other than James Levine, to conduct Tristan at the Met since Erich Leinsdorf in 1974. Daniel Barenboim has brought his own cast, which includes Katarina Dalayman and Peter Seiffert in the title parts as well as René Pape.

Much discussion has focused on Peter Seifferts use of an eletronic earpice prompter. Apparently he used this ear-plug prompter for previous Tristan performances at the Berlin State Opera. I had no idea they used this kind of electronic equipment in Berlin, however, I suppose, why not?

On Tristan and Isolde, Daniel Barenboim has this to say: "Tristan is an opera about death. And it is that death, the fear of death and the looking for death as the only possible way to solve the entanglement in which they find, this is, if you want, the locomotive, the motor of the opera. There is nothing more democratic in the world than death. In the end, it comes to everyone, rich and poor, good and bad, and is one of the things that we all have to deal with. ... He who spends his life without thinking about death misses out on one of the most forceful dimensions of human existence."

Daniel Barenboim rearranged the orchestra during the rehearsals to have the wood-winds and brass to the right and the strings to the left, an arrangement he also used at La Scala last season, which obviously must have required a bit adjustments for the musicians. 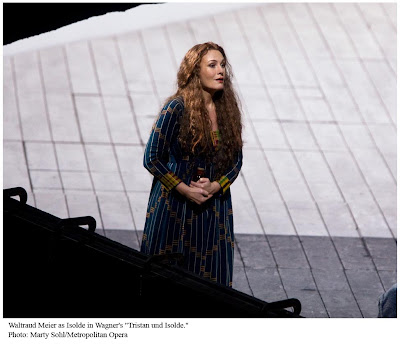 Of the singers of the opening night (Dalayman, Seiffert, DeYoung, Grochowski and Pape), the praise was unanimously left for René Pape, quite as expected. It may not speak top well of the qualities of the other performers, though few will disagree that René Pape is in his own class as King Marke.

As Barenboim´s chosen leads Peter Seiffert and Katarina Dalayman had cancelled numerous Tristans with him over the past two years in Berlin, neither of them were really expected to complete the run, and in this respect they fully lived up to expectations. Gary Lehman replaced Peter Seiffert on occasion, and lo! behold a miracle: Waltraud Meier replaced Katarina Dalayman once, in what was probably her only appearance as Isolde at the Met. On the other occasion the part was taken by Linda Watson.

There is no video footage of Barenboim in this production, so instead René Pape as King Marke, who, Barenboim and Waltraud Meier apart, has always been the only really compelling reason to watch this production, right from the opening in 1999:

Speaking of the La Scala Tristan, Amazon in the US is saying the DVD has been "discontinued by the manufacturer." Do you have any word on this?

It´s probably not been released in the US yet. They sell it at amazon.co.uk - a friend just received a copy today..

The La Scala Tristan is available in the US through amazon.com. Ignore the "discontinued by manufacturer" and click on the "Used and new" link after you've located the DVD. I ordered my copy from the US seller, and it arrived last Friday. It's a wonderful production.

So last night it was Gery Lehman as Tristan, and no Seiffert. The NY Times has a small article. Lehman did a fine job. The curse continues.

I haven´t actually heard any of the performances yet, thus my lack of comments on them.

Went to the performance. Very brief summary: I felt Lehman did not do a fine job - not a top rate Tristan. Dalayman a bit of a disappointment. Pape a phenomenon. Barenboim sensational. Again at the Met, a not unsubstantial number of people leaving after Act2. Very busy atm.. will try to provide more opinions soon.

James Levine has used the all-strings-to-the-left configuration for ELEKTRA so, no, it probably didn't require that much adjustment from the orchestra.

An excruciatingly boring production. It was easier to stay awake by closing your eyes and listening to Levine and Barenboim conduct than if one actually looked at the stage.

It says something for Meier that she made it almost riveting.