DVD: Meistersinger from the MET 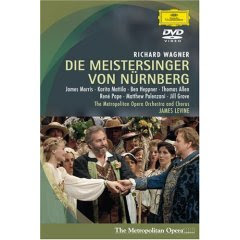 The combination of the Metropolitan Opera and Otto Schenk equals a no surprise rock-solid traditional staging. 16th century Nürnberg looks like 16th century Nürnberg, the sets are sumptuous, exquisite, beautiful as well as historically correct (more or less) and the libretto is followed attentively. In short: Wagner as Wagner wrote it, no interpretation applied by the director. A refuge from all the troubles of everyday life right into 16th century Nürnberg.

However -Is there not more to Meistersinger than this? Some will say, this is enough: To follow the so-called "composers intentions", though I secretly suspect Wagner quickly would have tired of 16th century Nürnberg and preferred some of the avant-garde stagings performed almost everywhere else...

Personally I´d prefer a director to provide new insights into the main characters and their relations. This may be done in 16th century Nürnberg as well as in a spaceship. But unfortunately it was not done/attempted here. Instead the singers look like being left to their own devices in developing their characters.

Nevertheless, there are many things to like here, despite the cast as a whole suffers from the classic opera singer dilemma being an inverse relationship between singing and appearance. Ben Heppner and Karita Mattila sang well but both looked out of place. James Morris looked excellent but was not in good voice. Only René Pape and Thomas Allen both looked fine and sang well.

James Morris, voice apart, is a wonderful Hans Sachs. Dramatically his gently fatherly demeanor convinces, and I find his interpretation superb. However...He was not in good voice here. Strangely enough, most of his problems are in the lower register, being almost completely replaced by an intolerable wobble. This is the best portrait of the character Hans Sachs available on the DVD. But the actual singing..that´s the problem.

Again, Ben Heppner may have a glorious voice, but as a singing actor he is entirely uninteresting physically as well as dramatically. Even the vocal characterization is lacking, and furthermore there is absolutely no stage chemistry between him and Karita Mattila´s Eva. Vocally, Karita Mattila is ideal as Eva, and the mix of insecurity, shyness and childish naivety she displays is ideal for this part, but somehow she looks out of place in this production - the lack of believable stage interaction between her and both Heppner and Morris plays a not insignificant part here.

René Pape is the perfect Pogner, unless, of course, one takes offense of the fact that he, once again, is by far the youngest and best looking of the male cast (as well as the overall best singer) and isn´t even made up to pretend to look like anyone´s father. Looking towards the future, I do wonder how the part of Hans Sachs will eventually suit him - no doubt he vocally will be able to sing it (and sing it vastly better than anyone else as well), but does this part really suit him dramatically? Wotan and The Dutchman, no doubt yes. But Hans Sachs? Obviously, that remains to be seen.
Thomas Allen is a fine Beckmesser, both well sung and acted. Allen is an excellent physical comedian capable of conveying malice as well. He is the bad guy - no doubt.

James Levine, once again flashing the smooth and well-tuned Metropolitan Opera Orchestra with the highly polished, but ultimately unengaging sound. Admittedly, it is not easy to bring this score alive, but more sparkle is needed. For the truly beautiful and sparkling sound, go for Christian Thielemann. For the dynamic and engaging sound go for Daniel Barenboim. For the straight, non-sentimental approach go for Georg Solti.

This is by a wide margin the best Metropolitan Wagner opera on DVD (which admittedly does not say much).

Your post leaves the impression that listening to James Morris is almost an ordeal. I find you really harsh... OK of course about the wobble in the low register but Morris is a real pro and he more than compensates in the medium and up register- yes the voice goes a little bit through the nose... He was visibly conscious of the problem and he chooses not to stress too much on the low notes. The consequence is that the characterization is lighter than the one you could expect having listened to... Hans Hotter for instance. But there is much more life in this interpretation -singing included- than in the bleak and monochromatic one given by Van Dam in the Zurich DVD (he is a little better with Solti).

I saw Morris singing Sachs in New York last year. And surprisingly is voice was in rather better shape than ten years before. I fear that it was a kind of swan song, because in his King Philip this year, he was visibly declining.

I am less enthusiastic about Allen's voice which lacks "projection". But if I admit that the actor is good I am not a fan of the singer.

Anyway all that is hair-splitting because I completely agree with your overall appreciation of this splendid DVD.

Well I didn´t intend to bash Morris, which I hardly do with a 4 of 5 assessment either I believe (on an afterthought I´ll skip the singing alone judgement as this is intended an over-all assessment).

But I really do like these low notes, which Morris didn´t really have here, though..:). Anyway Morris was in much better voice in Berlin when I heard him earlier this year than at these MET performances. Though he is a sort of sleep-walking Hans Sachs (and sleep-walking Wotan as well), which didn´t bother me as much as (some) of the Berlin audience. But then, who is really great Sachs? I´d still say Morris is the finest on DVD, the closest competitor being José Van Dam in Zurich, as you also mentioned.

I grew up with LPs and CDs and I find it difficult to limit my choice with DVDs.

First, Hotter with Jochum (But Treptow is a VERY raw Stolzing).

Then Fischer-Dieskau with Jochum too( OK DFD sings DFD and not specially Sachs but who minds?). Excellent Beckmesser(Roland Hermann). Awful Eva (Ligendza). Domingo is Domingo but at this time, his german was approximative.

Stewart is very good with Kubelik but they all sing at 2mmm of the microphone and the sound is not realistic at all. The Beckmesser doesn't seem really concerned. But Janowitz and Konya are glorious.

Adam with Karajan doesn't really know what to do with his character. That's the main problem of this luxuous interpretation.

Van dam (Solti) bores me... I can't help it. And I regret it because the conducting is really subtle (a surprise with Solti) and Heppner and Mattila are at their best.