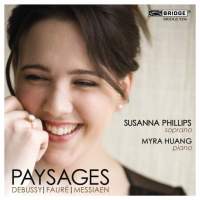 Susanna Phillips (born 1981) is a lyrical soprano, educated at Juillard School in New York City. A Metropolitan Council Award Winner and a first prize winner at the Operalia competition (both in 2005), she already has sung several parts (Musetta, Pamina, Donna Anna) at the Metropolitan Opera and is scheduled to return in the 2013 season as Fiordiligi as well as in a new production of Fledermaus.

Hats off to her for presenting an unusually challenging programme of songs by Debussy, Messiaen (Poemes pour Mi) and Faure for her first solo CD. Which was in fact the direct reason I noticed her disc in the first place - an internet search of recordings of "Poemes pour Mi" - there are not too many.
Messiaen composed this song cycle for his first wife in the 1930´s, at a time when his compositions were still very inspired by Debussy, thus the preceding Debussy songs seem very adequate.

Susanna Phillips has a lovely, warm and expressive voice with a technique to match especially Messiaen´s rather stiff vocal demands. It is also a quite distinctive voice, with a quite slow vibrato, and a rather nasal sound. Do I like the voice as such? I am not sure. But it is never unpleasant to listen to. Undoubtedly she does her best with the French diction, but I nevertheless fail to understand what she is singing. I don´t understand Renée Fleming´s French in her 2012 version of Poemes pour Mi either. However the French soprano Francoise Pollet demonstrates quite clearly (in the orchestral version with Pierre Boulez, the best on disc), that it is possible to understand the lyrics.

Don Giovanni at the Met 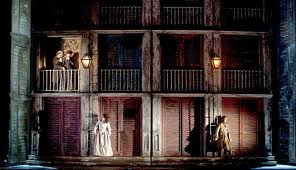 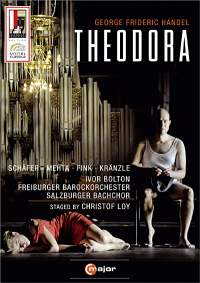 The story of Händel´s late (1750) oratorio "Theodora" in brief, is that of the Christian woman Theodora, who, persecuted by the Romans ultimately becomes a martyr for her faith with her lover Didymus.

With this staging, Christof Loy does not attempt to invite the audiences to identify with the characters but “exploring and experiencing the music and the works religious themes” in what he calls “almost like an installation” or a “performance process”. To achieve this, he lets the entire, massive stage of the Salzburg Festspielhaus depict the interior of a church and the staging unfolds as a rehearsal for a performance of Theodora. Not unlike his Frau Ohne Schatten from last years Salzburg Festival. But significantly more successful, though at times the singers almost seems to drown at the massive stage..

For me the real stand-outs in the cast were Joseph Kaiser´s dignified Septimus (= a main with a troubled conscience), Johannes Martin Krängle´s very believable Valens (=the villain). and Bernarda Fink´s wonderfully dignified Irene. For my tastes, Bejun Mehta´s Didymus is a tad too sentimental and feminine, and Christine Schäfer, despite dignified singing and great musician-ship, seems occasionally rather dry-voiced as Theodora.

However, the contrast of performing a small-sized baroque work in the massive Salzburg Festspielhaus is not at all interesting and most Händel admirers will love Ivor Bolton´s stylish performance with the Freiburger Barockorchester.
Despite not being created with a staged performance in mind, it is not, however the only Theodora on DVD and I must admit to vastly preferring Peter Sellars updated 1996 Glyndebourne production, infinitely more dynamic in addition to having the wonderful Lorraine Hunt as Irene. 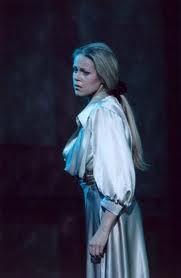 Il Trovatore from The Met 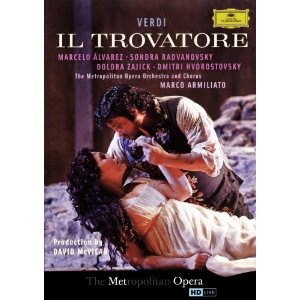 It is by no means a bad Il Trovatore, which opened 2009 at the Metropolitan Opera. A well-known production first seen in Chicago 2006, the conservatively-inclined Metropolitan Opera was not taking too big a risk giving director David McVicar his house debut. Not that David McVicar´s style is too far from what would be deemed acceptable by Met audiences: His trademark is the character development and personal direction of the singers, often done with some updating of the setting, but rarely into present times.

Accordingly, this Trovatore is updated from the 15th Century to the Spanish Liberation War in the beginning of the 19th Century, inspired by a set of etchings "The disaster of War " by the Spanich painter Goya. A dark, rotating set, effectively conveying a dark period. Not at all experimenting or innovative in terms of sets, however David McVicar´s trademark, the personal direction of the singers, is seen to full in this production with the most developed characters I have ever seen in any production of Il trovatore.

Being given four lead-singers, none of which are known to be especially fine stage actors, makes McVicars achievements even more remarkable: 50% of them are outstanding, 25% are fine and 25% less so.

Best are Dolora Zajick and Dmitri Hvorostovsky. This is simply the finest thing I have seen Zajick do on stage: Vocally the rather low-lying part is perfect for her and she has the necessary heft. But what makes her Azucena truly outstanding is her portrayal of her as a shell-shocked woman, who has become insane, probably as a result of post-traumatic stress. Far from a villain, she, too is a victim. And Dmitri Hvorostovsky, who previously has shown that he can in fact act if sufficiently inspired, is a dashing as well as dramatically convincing Luna. Vocally, he may occasionally sound a bit strained, but my guess is that few will care.
Leonora has been the calling card of Sondra Radvanovsky for almost a decade, and she will probably divide the viewers of this DVD as she does in the theater. Her Leonora is rather like a neurotic school-girl than a noble lady, however this is as valid an interpretation as any. My reservations lie with her shaky intonation (admittedly seen worse than on this DVD) and a voice that occasionally seems to be rather out of her control, though definitely large enough for the part.
Points to Marcelo Alvarez for obviously trying to act on stage and not only stand and deliver his area. But no doubt he is hired solely based on his vocal capabilities, which, admittedly he has. Radvanovsky and Alvarez in the superbly directed final scene do fine. With the more dramatically inclined singers we will hopefully see in this production the coming years, this scene will be electrifying.

Marco Armiliato is a follower, rather than a leader here, not succeeding in bringing out the nuances in the score, unfortunately.

The DVD to own? Perhaps, but Jonas Kaufmann and Anja Harteros will be appearing in the same work in Munich next year, which will probably be released on DVD as well. 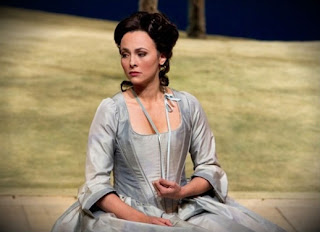 2008 recital review in Washington Post
2010 interview with Isabel Leonard in New York Times on her life and career.
2012 profile in Opera News magazine
2012 interview on her Glyndebourne Cherubino
2013 - opera it girl Isabel Leonard 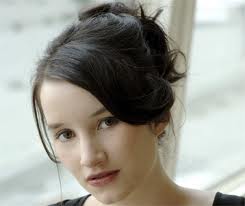 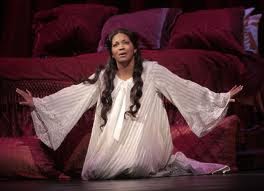 Nationality: American.
Born: Darien, IL, United States 1983.
Education and early career in brief: Masters from University of Michigan. From 2010 with the Los Angeles Opera Young Artist programme.
Voice: Lyric soprano.
Main repertoire includes: Too early to say. Has until now sung Juliette and Musettea professionally on stage.
Main events until now: Musetta at the Los Angeles Opera 2012 and Liu at Metropolitan Opera 2012.
Winner of Metropolitan Opera National Auditions 2012 and winner of all the 1st prizes in Operalia 2012.
Upcoming major events: We shall see.
Future performances here. Biography and website here.

Janai Brugger with Rusalka´s song to the Moon, Chicago 2009 with piano: