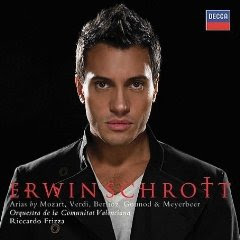 To say that Erwin Schrott´s rise to fame is based mainly on his good looks as well as his relationship with Anna Netrebko would be unfair as well as untrue. Though I doubt, that Decca would have released this his first solo-album had he not been very much “in the public eye” for the moment, so to speak. Not that Erwin Schrott doesn´t have something to promote by himself without having to appear on the front-page of Austrian tabloid magazines. He certainly has.

With the repertoire presented on this disc Decca seems to intend to market Erwin Schrott as the good-looking but ultimately soft and emotional man.

However, Erwin Schrott is very much a physical performer, having made his career mainly as Leporello, Don Giovanni and Figaro. And excerpts from these parts are clearly the most successful parts of this disc as well, though his Mozart singing is rather unorthodox and will not be to everyone´s liking.

Erwin Schrott´s voice is of the rather rough and uneven basso cantante type, with an essentially beautiful and quite powerful sound centered around the middle register. His strong vocal points are edgy (and comic) characterizations (Don Giovanni, Leporello and Figaro), while he has no legato-lines to elaborate much on (evident in Voici les Roses from Damnation de Faust) and generally he simply seems to lack musicality or style, being rather rough and uneven regardless of repertoire. A quality, some listeners may well find charming.

Furthermore, interpretatory depth and subtleness are not calling cards at this point in Erwin Schrott´s career, quite evident in the Elle ne m´aime pas (Philippe from French Don Carlos) and in a Méphistopheles-Serenade (Faust) sung completely straight-forward without the slightest hint of the essential undercurrent malice. That said, he fares considerably better with Robert Le Diable.

On stage, all these issues may be easily overlooked as he is a compelling performer. For those wanting to experience Erwin Schrott at the top of his game, I´d recommend the recently released DVD of Nozze di Figaro. Or the upcoming Don Giovanni DVD from Salzburg.

For those wanting to listen to the basso cantante repertoire on CD from a singer of today, I´d recommend the CD with René Pape.
Promotional video from Decca:
Overall impression (scale of 1-5, 3=average):

What kind of an accent is that (when he speaks, I mean) ? Surely not Australian ????
Apart from that, good looks, but still a lot to learn as far as singing is concerned, I'm afraid...

Ah, all right, I had misread the reference to "Austrian tabloid magazines", I thought you said "Australian" :-(
I have also done my homework, and found that ES is from Uruguay...

You mention that a DVD of the Salzburg Don Giovanni is coming out. Do you know when? Which company is going to release it?

Not exactly. The Salzburg Festival management state at this years festival that the DVD would be released within a year. Presumably on DECCA or DG.