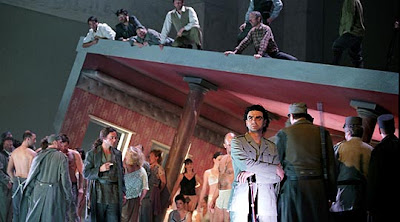 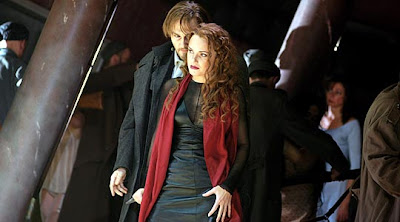 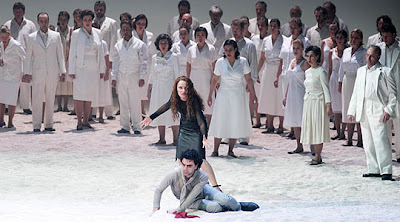 .
Martin Kusej´s Carmen is a co-production between the Berlin State Opera and the Paris Châtelet (shown in 2007).

In short: This is not a Carmen for traditionalists.

The entire opera is a flash-back starting with Don José´s on-stage execution. Don José is unstable from the beginning and doomed to destruction. Carmen does not play an essential part in this.

The production emphasizes sex, death and violence. Basically everyone is killed: Micaëla by a stray shot. Carmen in front of a white-clad and white-painted audience in front of which also the dead Escamillo (killed in the arena) is carried. And finally Don José in the first scene. Unfortunately, Kusej couldn´t help throw in some predictable symbols such as a red skarf as well.

Kusej´s minimalist, grey concrete staging with a quadrangle-turning-execution-pad-turning-whorehouse provides an austere background for this updated dark interpretation. Carmen is obviously a prostitute, dancing away in the basement with her underwear-clad colleagues surrounded by the soldiers. The rest of the story basically tells itself.

As engaging theater it works 100% , most importantly because Rolando Villazón and Marina Domashenko are superb.

Marina Domashenko is simply a superb Carmen, a beautiful dark mezzo as well as a compelling stage presence. It makes complete sense that José would fall in love with her and it´s equally obvious why she tires of him. Domashenko is deservedly gaining world-wide recognition with this Carmen and I do not think I have heard a current Carmen superior to hers.

Rolando Villazón´s Don José (the first of his career) is a desperate maniac verging on mental instability from the start. As always, he identifies 100% with his character, which also suits his hyperenergetic, neurotic acting well.

Alexander Vinogradov´s Escamillo is the only rather weak point in the cast - he simply looks like a teenager and it doesn´t quite make sense why this Carmen would be fascinated by him. Norah Amsellem is dramatically a convincing Micaëla. She has a clear soprano, though the vibrato is much too heavy for my taste, making her sound out of tune.

The orchestra under Daniel Barenboim is engaging throughout.

The London Carmen with Jonas Kaufmann and Anna Caterina Antonacci seems upcoming as well. Which to prefer must surely be a matter of taste. Though the London Zambello production does not appeal to me, the singers very much do. Though I´d suppose this to have the slight edge. Lovers of Carmen most probably will want both.

Rolando Villazón and Marina Domashenko in the final scene:

Highlights from the production:

I love Marina Domashenko as Carmen. I saw her in this production on video, live at the Arena di Verona with José Cura and Samuel Ramey a few years ago, and also in a dvd of the same production with Marco Berti and a forgetteable Escamillo. I love also Rolando Villazón as Don José and I saw him in this role only on a dvd of this Berlin's production.


This has also been confirmed today on universal website that will be released on Blu-ray in October, great news for those that have capable systems for this.

Domashenko is my favorite Carmen, I was so sad when she was indisposed for the SF performances of Carmen in 2006.

I absolutely hate Norah Amsellem's vibrato. I heard her sing Micaëla in London, and it was not good. Perhaps she was ill or something, but she was just not in tune.

I´ve seen some clips from the London Carmen and Norah Amsellem was not in tune there either..

The Micaëla for the initial run of performances in Berlin was Dorothea Röschmann, whom I´d much have preferred to see here.

This is the WORST production of Carmen I have ever seen from the staging standpoint. I was excited to see it was on OvationTV and just got done watching it. I wish I would have been able to see the audience's reaction to the director. The concept was crap and did not pan out or get fulfilled most of the time. I felt sorry for the singers in this production. The voices were good on the whole. Villazon is not a Jose in my eyes or ears. The Carmen was good vocally, the Micaella was good but pushed the sound too much without enough low body support. I have been in more Carmen's than I have seen, and am doing the show starting next week, I hope I can erase the memory of this catastrophe, cleanse my palate and start to like Carmen again. This production ruined it for me.

Vulgar Carmen productions are becoming ever more the norm, sadly. A paltry, burlesque version was produced by Opera Zuid in The Netherlands some time back - a totally shabby treatment of the subject. The *singer* was more adept at removing her underwear than she was at using her 'voice'.

I thought the performers were wonderful. The concept was strange and so was the staging, especially the chorus at the beginning of Act IV.I would like to know why, with such a tight, dark color scheme, Frascetta was in red. She pulled focus every time she was on stage. Couldn't the costumer and director see that?