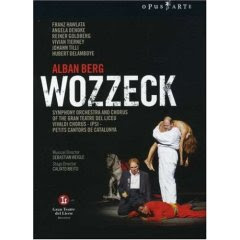 Directed by the (in)famous exponent for advanced Regietheater, so-called enfant terrible Calixto Bieito, this DVD will probably divide potential audiences along the usual imaginary line: Those who find it an interesting approach to the work and those who simply hate it. I am clearly rooted in the first camp. Yes, we do se both naked bodies and necrophilia on stage, but to dismiss the staging on these grounds alone equals the same disrespect for Calixto Bieito as those applying it accuse him of showing Alban Berg.

Bieito´s visually stunning production sets the story in a grim postindustrial environment, quite literally in the basement of a factory, covered with pipelines continuously exuding poisonous smokes. Wozzeck and Marie belong to the working class. They live between these pipelines and their child needs an oxygen tank with face mask to be able to breath in this lower class environment of dirt and fumes.

Upon embarking on her affair with the Tambour major, the ambitious Marie moves upwards in society to the glamorous dresses and quite literally to the upper-floor of the factory, where the air is clean. The necrophiliac element in the staging is attributed to the Doctor, and the nudity is represented by the workers, who undress in the last scene (exactly with what purpose I am not sure…). Overall, Bieito, in my opinion paints a grim picture of a sick and divided society and provides with an interesting take on the work.

Franz Hawlata is vocally a fine Wozzeck and a good actor as well, very believable as the naive worker. Angela Denoke is essentially a lyrical Marie, but as a character she is cold and opportunistic here.

I have some concerns regarding the orchestra, with the rather unspecific, and perhaps unfair, impression that Sebastian Weigle does not bring out the maximum of nuances and power in Alban Berg´s music, sounding slightly muffled.

For those preferring a traditional production, I´d recommend the Claudio Abbado-conducted Wozzeck from the Vienna State Opera, brilliantly conducted with myriads of nuances, a realistic staging, which will offend no-one and with fine protagonists, especially the superb Doctor from Aage Haugland. Alternatively on DVD, there is Patrice Chéreau´s staging from Berlin conducted by Daniel Barenboim with Waltraud Meier as Marie.

This is the best Bietio's production...