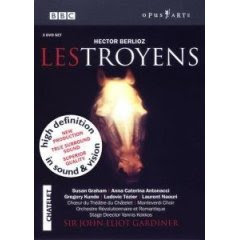 
These performance of Les Troyens were staged in celebration of the 200th anniversary of Berlioz birth at the Paris Châtelet Opera 2003.

Yannis Kokkos created a much-celebrated aesthetic as well as eclectic production mixing elements from several centuries such as 20th century raincoats with synthetic fibre made breastplates, antique gowns and the like.

The sets were classic and simple: In Troy, the war state, the colours were brown/gray with a flight of steps in the background beneath projected images of a city amongst which the white head of the Trojan horse appears. Eventually Troy is invaded by army-clad machinegun soldiers. I sill haven´t figured out exactly how they managed to create the reflected images of the steps at the back of the stage, at times showing us the back of the authors, at other times showing us the actual action.

In Carthage, the female pacifist state, the colours were bright blue and white. Images of the sea were projected in the background.
Anna Caterina Antonacci is a superb Cassandra, a powerful actress with a gloriously rich, though not large voice. She is well-matched with Ludovic Tézier´s fine Chorebe in a cast with virtually no weak links.

Perhaps the greatest achievement is that Gregory Kunde managesto survive the devlishly difficult part of Enée.

I have never found Susan Graham to be a particularly interesting singer, however many have found her Didon moving - I simply did not. I lack intensity and drama in both acting and voice. I much preferred Anna Pokupic as her sister Anna (who according to the ancient Greek legend follows Enée to Rome and commits suicide caused by jealousy of Enée´s wife).

John Eliot Gardener conducts the period instrument Orchestra Révolutionnaire et Romantique, using Berlioz's original orchestration including saxhorns in a rather light reading. For admirers of period performances I imagine this to approximate the ideal. Personally I´d much prefer the sumptuous orchestral sound of modern-day instruments.

If Les Troyens was a symphony for orchestra and tenor (Plácido Domingo as Enée), I´d recommend the Levine-conducted version available on DVD from the Metropolitan Opera. However, for the rest of the MET DVD I find the staging dark and dull with no chemistry between the protagonists and with seemingly unending ballet sequences.

A BBC documentary with plenty interviews is included as bonus material.

Anna Caterina Antonacci and Ludovic Tézier in the Act 1 duet:
The bottom line (scale from 1-5, 3=average):

I'm very surprised that you were not moved by Susan Graham. I found her absolutely riveting with the last scene being so emotionally painful as to be almost unwatchable (and I mean that as a compliment) rather in the way that vickers in the final act of Tristan was almost too painful to watch.
Horses for courses I guess but I do love this DVD.

Don´t exactly know why either. I´ve never been particularly taken by Susan Graham - either dramatically or vocally. Guess I find her to polished, in lack of a better term.